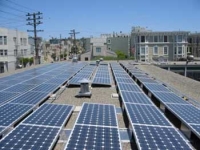 A growing demand for cleaner, cheaper and arguably safer forms of energy is turning what was once considered a cottage industry into big business in California. Landmark legislation to fund the nation’s largest solar program goes into effect early next year, bringing with it rebates and financial incentives to spur consumer and commercial use of solar technologies — and the promise of more jobs and economic growth for the state. Sensing big opportunity, investors are pumping hundreds of millions into solar innovation for Silicon Valley startups.

The California Solar Initiative (CSI), signed into law last August as part of the Million Solar Roofs Initiative, or Senate Bill1, is expected to generate not only 3,000 megawatts (MW) of solar energy by 2016 but also close to 40,000 operations and maintenance jobs (assuming one year of duration for each job) in California alone. After expenses, the energy gleaned from the solar installations over 10 years is expected to save the state at least $6 billion in avoided energy costs. California also raised its net metering cap — the dollar amount paid to solar customers for the extra energy they contribute to the grid — from .05% to 2.5% to make solar an even more attractive energy choice for residents and businesses, and passed new environmental legislation in 2006 requiring businesses to reduce pollution-causing carbon emissions by 25% over the next 15 years. From a policy perspective, “2006 has been the biggest year for solar in the history of the US,” said JP Ross, director of programs for Vote Solar, an advocacy group in San Francisco that closely tracks solar-related legislation. By March of 2006 demand for the CSI rebates had already resulted in a projected 91 MW in planned installations, causing the California Public Utilities Commission to lower its rebate from $2.80 per watt to $2.50 per watt to preserve funding. Solar installations in California now contribute about 45 MW to the state’s power supply annually, according to Ross, compared to less than 2 MW of solar power contributed in 2000. But the real boon to California’s economy is likely to come from the expansion of the solar industry itself. With political and financial incentives now in place, higher prices for fossil fuels, and an increasing public awareness of the need for renewable energy sources, companies that manufacture solar equipment are ramping up for a jump in demand. SolarWorld AG, one of the world’s leading producers of solar silicon crystals, became the largest such manufacturer in the US in 2005 when it established subsidiary operations in Camarillo, California, and acquired silicon manufacturing facilities from Shell Solar Industries in July of 2006. Since the acquisition, SolarWorld California has doubled both its workforce size and its production capacity. Sharp Electronics, the world’s largest producer of solar energy cells, likewise expanded its production facilities to meet growing demand in both Japan — the world’s second largest solar market after Germany — and California. In October, Sharp announced plans to raise its annual production capacity from 500 to 600 MW per year. “California’s has one of the most aggressive solar programs in the country,” said Chris O’Brien, vice president of strategy and government operations for Sharp Electronics’ Solar Energy Group. “It [CSI] has had a tremendous psychological impact on the industry, giving [solar] companies a much longer planning horizon to work with, greater confidence in making investments, more volume and market growth, and ultimately a faster pace of innovation.” In fact, the solar energy industry is expected to grow from $11 billion in 2005 to $54 billion in 2015, according to market research firm Clean Edge Inc., with much of that growth coming from companies based in California’s Silicon Valley. “In the last 12 to 18 months there has been a flood of activity” around solar investing, said Tim Woodward, managing director for Nth Power, a venture capital firm in San Francisco that invests exclusively in renewable energy companies. According to Woodward, more than $325 million has been invested in California-based solar startups — most located in Silicon Valley and headed by executives with backgrounds in the high-tech industry — since early 2005. “Solar used to be viewed as something of a science project,” said Woodward. But as solar began achieving cost parity with traditional energy sources, investors began to show interest. Now, he claims, profitable IPOs for startups such as Evergreen Solar and Suntech Power have fueled intense interest in the sector. According to Woodward’s estimates, solar investing now accounts for 12% to 14% of all venture capital investments. “There’s a lot of overlap with the high-tech industry here in Silicon Valley,” said Woodward. “Executives are coming in and applying their strengths and expertise to solar, which makes VCs more excited to back experienced entrepreneurs.” Claudia Graziano is a San Francisco-based writer and editor who writes frequently on the topics of technology, energy and education.