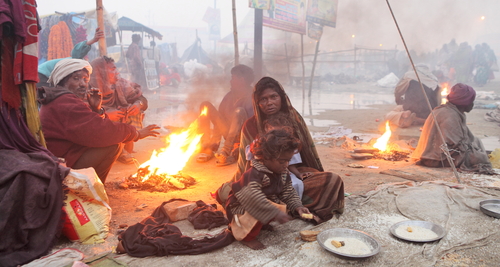 The Indian state of Uttar Pradesh is home to the country’s largest population of un-electrified villages. According to data collected by the Council on Clean Energy, Environment, and Water (CEEW), more than seventy percent of Uttar Pradesh’s 220 million residents still depend on kerosene lamps and diesel generators for lighting and electricity.

Much of the problem is rooted in the lack of commercial viability: in the absence of subsidies, it’s difficult for both utility distribution companies and for small-scale energy providers to earn returns in a market where the primary consumers fall near or below the poverty line.

CEEW also found that almost half of households without electricity were connected to the grid, showing that lack of infrastructure is only one layer of inadequate power delivery. Coupled with unclear regulatory policies and the high cost of capital, small-scale energy developers face a high barrier to entry in India’s off-grid power market.

In February, Uttar Pradesh’s state government launched the first minigrid policy in India aimed at easing some of those barriers for private developers, and the state’s regulatory commission ratified it earlier this month with specific guidelines on implementation and compliance from the utility.

In addition to creating a 30 percent project subsidy, the policy removes restrictive service rules, such as arcane licensing requirements to operate as an energy provider, and outlines ways that minigrids can coexist with the central grid if it reaches a village where a minigrid is already operating. For the first time in India, the policy also recognizes private minigrid developers as legitimate energy providers.

Omnigrid Power (OMC) is one of those solar developers, and they are pioneering the anchor load model, arguably one of the most promising mechanisms to deliver electricity to the masses.

With the remaining power, OMC services surrounding households and small businesses as a secondary market, usually offering two light bulbs and a mobile charging outlet for as little as 100 rupees a month.

The cross-subsidy from anchor loads makes it feasible for OMC to absorb the costs associated with small household revenue, and soft costs associated with customer acquisition and service. These can be the biggest barriers for many small power companies that deal directly with households and rely heavily on local trust and relationships.

OMC estimates that there are about 10,000 mobile towers that have anchor load potential in the state of Uttar Pradesh.

On the other end of the size spectrum, companies like Mera Gao Power specialize in solar microgrids, with modular projects as small as a single solar panel and a battery pack. Like OMC, Mera Gao Power installations also provide customers with two light bulbs and a mobile charging outlet.

Unlike OMC, households and small shops are Mera Gao Power’s primary customer base. According to co-founder Brian Shaad, the company has over 22,000 customers, which they largely attribute to the relationships they have nurtured at the village level.

The company’s core business is in “hamlets” — remote areas with fewer than 100 households and no commitment from the government that central grid power will ever arrive. Hamlets are also generally poorer than neighboring villages. According to Mera Gao Power’s market research, incomes are seasonal and can be as little as $40 a month.

Mera Gao Power’s advantage is that small systems can be installed in under a day, and that project costs are relatively cheap — $900 – and can be recouped in as little as two years.

OMC and Mera Gao Power share one principle: they both need to reach meaningful economies of scale to earn returns for investors and be profitable.

That bottom line, though, is probably the ticket to widespread electrification in rural India. Unlike government or NGO-sponsored projects, both companies are obligated to generate returns for investors. Despite the best efforts of government and other development driven initiatives, rural electrification projects that don’t prioritize private ownership have yet to demonstrate long-term viability, and graveyards of neglected, damaged, or abandoned projects litter rural India.

That’s not to say that the roles of the government and NGOs in rural electrification aren’t important. Rather, different sets of stakeholders play critical roles introducing financing, in advocacy and influencing lawmakers, and providing training and market research.

And the market potential is huge; nearly a quarter of India’s rural population lacks access to electricity, and The Climate Group estimates the market size for distributed renewable energy providers in that space will be at least $150 million by 2018.

Still, scaling across rural Uttar Pradesh and India is one of the most elusive challenges for any developer.

For OMC, the challenges are regulatory uncertainties and the high cost of capital. The new state minigrid policy won’t be a panacea, but OMC is optimistic that by sanctioning the role of the private sector, the policy will draw investors by signaling the long-term viability of projects.

While companies like OMC welcome the policy, there are around 40 enterprises in India offering off-grid solar services — most of which won’t benefit from the policy due to the relatively small size of projects. For them, private sector innovation will continue to be the real catalyst to scaling across rural India.

This article was originally published by The Energy Collective and was republished with permission.