More
Home Storage Thinking Smarter about Renewables on the Grid 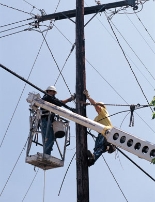 London, UK [Renewable Energy World Magazine] You would be hard pressed to name an industry or technology that’s gone virtually unchanged since the 19th Century and yet which is still thriving today. But that is the story of the electricity transmission grid.

Growing energy demand and increasing global temperatures are a double challenge. With today’s energy infrastructure, the only way to meet this increasing demand is to boost the use of carbon-producing power generation – a roadmap to disaster.

Concerns about the environment have utilities companies and legislators looking towards clean energy alternatives. Members of the European Union have agreed to increase renewable energy generation by 20% and reduce carbon emissions by 20% by 2020, but today’s infrastructure is unable to maximize the benefits of renewable resources. Wind and solar resources are tacked onto the grid without being integrated with other generation or optimized as a reliable first-tier energy source. Grid congestion can act as a barrier to full utilization and renewable variability can cause reliability challenges at relatively high levels of penetration.

The solution is a smarter grid infrastructure which can improve the future of both energy demand and energy generation. Smart grid technologies hold the potential to do just that, creating efficiencies and lowering electricity consumption, while at the same time making it easier to connect renewable energy sources into the power grid.

The good news is that the technologies needed to create this smarter grid and make wind, solar and biomass energies a greater part of the generation mix already exist. These technologies are capable of fully integrating renewable generation into the grid efficiently and reliably, through demand response programs, Energy and Distribution Management Systems (EMS and DMS) and energy storage technology.

National Grid, one of the world’s major utilities, serves over 16 million households in the UK and the US. The company sees renewable energy sources as a large part of meeting the formidable challenge ahead. We will draw an ever-increasing proportion of our energy needs from cleaner, renewable sources, much of which will be sourced locally, according to Steve Holliday, National Grid’s CEO. National Grid is just one example of what we will need to see around the world with renewable energy in the generation mix. From funding considerations to regulatory reform, we need government support to be firmly behind the move to renewable energy.

But for renewable generated power to fill the need outlined by the EU, the smart grid technologies at our disposal must be applied. Renewable energy is very different from the ways we generate power now. We need to update our infrastructure to accommodate the differences and capitalize on the advantages. Inventors have created the solutions, we need to employ them.

Traditionally, electricity has flowed one way; from a power station to a customer. However, as more renewable energy is generated by alternative sources, power will be entering the network from multiple locations, including the distribution network, otherwise known as distributed generation.

The current grid was not designed with multi-directional power flows in mind. Smart grid technologies will enable the optimization and use of high percentages of renewable power and prepare the grid to integrate widespread distributed generation.

Distributed generation can be located throughout the grid, with deployment of small-scale installations of wind turbines or rooftop solar. To integrate this power into the grid effectively, utilities need to update their DMS software to accommodate the two-way power flow. With the potential of these smaller-scale deployments of renewable generation being located throughout the grid — even at as small a scale as individual household wind turbines — grid network management needs to be much smarter than it was in the past. Utilities throughout the world are installing smart grid DMS systems to integrate this energy and use it to replace fossil fuel generated power. For example, 13 of the 14 energy distribution companies in the UK already use a GE DMS system designed to handle distributed generation and capitalize on renewable resources located virtually anywhere along the grid.

Large-scale renewable generation such as wind farms and concentrated solar installations are capable of delivering large amounts of energy from a centralized location, similar to traditional generation but with some challenging differences. As the government encourages the growth of these renewable energy plants, smart grid technologies are needed to improve the high-voltage transmission from the plants to neighbourhood distribution grids. Energy Management Systems in a smart grid scenario have the facility to monitor the capacity on lines and maximize the efficiency of transmission. Since renewable sources are not capable of constant, predictable output, a smart EMS system can optimize the power transmitted. This maximizes capacity, reduces the need for additional transmission lines and reduces wasted power.

Constant Power from a Variable Resource

Integrating that information with energy management and distribution systems enables utilities to free up the capacity needed on power lines when generation will be high. It also tells them when other generation sources will be needed to fill in the gaps. Smart grid renewable prediction also tells utilities when there may be more renewable potential than is needed or than the available power lines can accommodate, preventing unnecessary production and congestion on the lines.

Two-way power flow, sophisticated controls and grid automation technologies can help bring wind, solar and other alternative energy solutions safely into the distribution grid and move it where it’s needed when it’s needed.

Smart grid technologies can also help change the way we look at power storage. Today we generate power to meet real time needs; we need more power, we turn on more turbines. Smart grid storage technologies can help maximize renewable energy capacity by allowing us to generate and store renewable power whenever the resource is readily available — whether there is demand on the line or not. Battery banks and controls can hold renewable overcapacity and release it into the grid as it is needed.

The goal of increasing the efficiency of our grid is also very achievable with smart grid technologies, particularly as an awful lot of the energy put into the power grid is wasted.

That shouldn’t be a surprise because the grid was actually designed to need overcapacity or waste to operate. The lights go on when you flip the switch because there is more than enough power on the lines. Smart grid solutions can introduce better, two-way communication within the grid. That means utilities have a better idea what the real demand for power is, so they can produce and deliver an amount of energy that more closely mirrors that actual demand, reducing power losses and waste.

With a smarter grid, utilities will be able to control power more effectively to be more efficient, squeezing as much performance as possible out of the existing grid, allowing costly infrastructure upgrades to be deferred longer and stretching the effectiveness of fuel supplies.

With new demand response technology, utilities will be able to explore how reducing a consumer’s energy ‘load’ or demand might help the utility to manage variations in renewable energy production. For example, consumers may ‘opt-in’ to utility programmes which automatically adjust high energy consuming devices, such as water heaters, during periods of peak demand and higher prices.

How does a wind-powered car sound? A solar scooter? With smart grid technologies they really are possible, because the smart grid makes Plug-in Hybrid Electric Vehicles (PHEVs) practical realities.

Cars being introduced today can travel the average daily commute of most people on a single battery charge and smart grid technologies can make that charging a snap. Dynamic pricing and automated charging stations will charge the cars overnight, when the demand and costs of electricity are lower. And, with a higher concentration of renewable energy in the mix, it will be as though wind energy is powering our automobiles. Wind power is also strongest at night, so we can put the clean and green power that’s being generated directly into our cars and onto our cleaner roads.

All of this new technology means more jobs. For example, in the UK, the government’s new 2008 Planning Act will make it easier to plan, approve and fund the big projects that are needed to modernize the grid. And that modernization will mean jobs. The UK Energy and Utilities Skills Sector Council has conducted research which suggests there will be a need for an additional 9000 highly skilled workers in the industry in the next five years.

For example, many of the UK’s energy policies and regulations were created to address the needs and realities of outmoded operating models. We need to do more to move our regulation and our focus to deploying solutions today. Technology companies, utilities, academia and government need to work together to create a new roadmap to smart grid success. It needs to be an open, dynamic vision that includes open systems and shared platforms, so that innovations and new solutions can come from anyone and everyone.

Finally, we need to view the smart grid as the holistic, end-to-end energy solution that it is. Integrating renewable generation is but one element of a truly successful smart grid. Using the world of smart grid technologies can raise the efficiency, increase the reliability, decrease the waste and dramatically shrink energy’s carbon footprint.