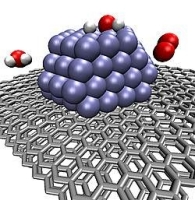 Imagine a car that runs on hydrogen from solar power and produces water instead of carbon emissions. While vehicles like this won’t be on the market anytime soon, UW-Madison researchers are making incremental but important strides in the fuel cell technology that could make clean cars a reality.

Materials Science and Engineering Assistant Professor Dane Morgan and PhD student Edward (Ted) Holby have developed a computational model that could optimize an important component of fuel cells, making it possible for the technology to have a more widespread use. Essentially, they investigate how particle size relates to the overall stability of a material, and their model has shown that increasing the particle size of a fuel cell catalyst decreases degradation and therefore increases the useful lifetime of a fuel cell.

Fuel cells are electrochemical devices that facilitate a reaction between hydrogen and oxygen, producing electrical power and forming water. In the type of fuel cells Morgan is researching, called proton exchange membrane fuel cells, or PEMFCs, hydrogen is split into a proton and electron at one side of the fuel cell (the anode). The proton moves through the device while the electron is forced to travel in an external circuit, where it can perform useful work. At the other side of the fuel cell (the cathode), the protons, electrons and oxygen combine to form water, which is the only waste product.

Though the premise sounds straightforward, there are multiple hurdles to producing efficient fuel cells for widespread use. One of these hurdles is the catalyst added to aid the reaction between protons, electrons and oxygen at the cathode. Current fuel cells use platinum and platinum alloys as a catalyst. While platinum can withstand the corrosive fuel cell environment, it is expensive and not very abundant.

To maximize platinum use, researchers use catalysts made with platinum particles as small as 2 nanometers, which are approximately 10 atoms across. These tiny structures have a large surface area on which the fuel cell reaction occurs. However, platinum catalysts this small degrade very quickly.

“The stability of bulk versus nanoparticle materials can be understood intuitively by thinking of cheese,” says Morgan. “When you leave a large chunk of cheese out and the edges get crusty the surface is destroyed, but you can cut that off and there is still a lot of cheese inside that is good.

“But if you crumble the cheese into tiny pieces and leave it out, you destroy all of your cheese because a larger fraction of the cheese is at the surface.”

Rapid catalyst degradation means the fuel cell doesn’t last long, and the U.S. Department of Energy estimates fuel cells must function for 5,000 hours, or approximately seven months of continuous use, to be practical for automotive energy solutions.

Morgan and Holby, who are working in collaboration with Professor Yang Shao-Horn from the Massachusetts Institute of Technology, have found a possible solution to the rapid degradation problem: When it comes to catalyst particle size, sometimes smaller isn’t better.

Their modeling work, which is funded by 3M and the U.S. Department of Energy, shows that if the particle size of a platinum catalyst is increased to 4 or 5 nanometers, which is approximately 20 atoms across, the level of degradation significantly decreases. This means the catalyst and the fuel cell as a whole can continue to function for much longer than if the particle size was only 2 or 3 nanometers.

The research into the fundamental physics of particle size will be useful as scientists extend their platinum studies to exploring platinum alloys, which can reduce platinum consumption when used as fuel cell catalysts. Morgan is beginning to research models to study size effects on the stability of platinum alloys, such as copper-platinum and cobalt-platinum catalysts.

“Fuel cells are just one of many energy technologies-solar, battery, etc. — with enormous potential to reduce our dependence on oil and our carbon emissions,” says Morgan. “Computer simulation offers a powerful tool to understand and develop new materials at the heart of these energy technologies.”

Sandra Knisely is a science writer with the College of Engineering External Relations at the University of Wisconsin-Madison.