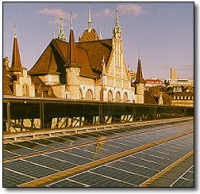 Shell Solar will introduce two new lines of monocrystalline photovoltaic (PV) modules in Europe starting this Autumn. According to the company, each new offering will have a power output capacity six percent higher than its predecessors despite the surface areas remaining unchanged.

Camarillo, California – July 3, 2003 [SolarAccess.com] The greater power output is the result of a change in design. Whereas the solar cells in the lines being replaced have rounded corners, those in the new modules are almost square. The unoccupied spaces between the cells are smaller so that the end-user obtains more power for the area covered. The new modules are called the Shell SQ line, with SQ standing for square. Shell SQ modules will gradually replace the existing SP product line. Shell SQ80 (80 watts peak power) will replace Shell SP75 (75 watts peak power). Shell SQ160-C (160 watts peak power) will supercede Shell SP150 (150 watts peak power). Both will be covered by 25 year power warranties. According to the company, the SQ80 is particularly well suited for off grid 12-volt industrial applications where power has to be generated at a high rate by a limited module surface area. The Shell SQ80’s compact dimensions enable it to be readily transported to and set up at remote locations. The company said the SQ160-C is their most cost-effective product, and well-suited for operation in commercial grid-connected applications with system voltages of up to 1,000 volts. When mounted on residential or industrial rooftops, where power has to be generated at the highest possible rate from a limited module surface area, the Shell SQ160-C provides consistently high energy outputs. Shell SQ160-C modules are supplied with fitted cables and MultiContact plugs making installation quicker and cheaper. In other Shell Solar news, the company has announced they will supply 2,400 CIS (copper, indium, selenium) thin film PV modules to a major construction project in St Asaph, North Wales. According to their company, the order is Shell’s largest yet since they joined the solar industry. The panels will be installed by Welsh company PV Systems on the south-facing main façade of the OpTIC Technium, an innovation and business support center for the opto-electronics industry being constructed by the Welsh Development Agency. They will provide peak power of 84 kW, enough to supply 60 typical homes. The project is being supported under the United Kingdom’s Large-Scale Field Trial for Public Buildings, a Department of Trade and Industry initiative to promote solar power through its use in government buildings. CIS thin film is a new way of making a solar cell. Copper, indium and selenium are applied in minutely-thin layers to glass through a vacuum process. This vacuum technique is widely-used for coating window glass but is relatively new in the solar industry. The current mainstream crystalline silicon solar technology involves sawing, chemically etching and baking thin wafers from rods of highly-purified silicon in a high temperature process. The main benefit of CIS thin film technology is anticipated lower manufacturing costs and a more competitive kWhr price, said the company. Shell Solar was the first company in the world to begin series production of CIS solar modules, five years ago in Camarillo, California. The company said their CIS thin film modules offer exceptional performance in low-light, adverse and high temperature environments, making them ideal for locations where there are changeable weather conditions. With a uniform appearance, CIS thin film modules are also suitable for use in projects where aesthetics are an important consideration.