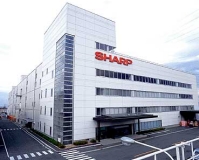 Albuquerque, New Mexico [RenewableEnergyAccess.com] Sharp Corporation, the largest producer of solar photovoltaic modules in the world, recently signed its first major research partnership with a U.S. government research laboratory. The deal is tailored to expand its research and development of renewable and alternative energy technologies.

Through an arrangement brokered by the New Mexico Economic Development Department, Sharp will work with the New Mexico-based Sandia National Laboratory, the nation’s premier solar energy research facility. The agreement, called a Cooperative Research and Development Agreement (CRADA), has been in negotiation since June 2004, following New Mexico Governor Bill Richardson’s meeting with Sharp’s executives in Tokyo to sign a MOU between New Mexico and Sharp. The initial thrust of the partnership will focus on fuel cell technologies but will later involve research and development of Sharp’s solar photovoltaic technologies including tests and improvements on reliability, durability, calibration of solar modules, inverters and other advanced applications. “Sharp will be able to take advantage of the research capacity, superb solar environment for testing, and prototype manufacturing capabilities within the state of New Mexico,” said Takashi Tomita, Corporate Director and Group General Manager of Sharp Solar Systems Group, “This in turn will help us continue to bring advancements to market in solar energy and other clean energy technologies.” Jeff Nelson, who manages the solar technologies group at Sandia and was the lead person from Sandia writing up the project agreement with Sharp, said the company’s immediate focus is on micro fuel cell applications, such as the use of fuel cells to power consumer electronics like laptops, cell phones and PDAs, and also direct methanol fuel cells for mobile power applications. He said Sandia brings “novel device membranes” to the table while Sharp brings extensive system and application level experience. “This is a stepping stone,” Nelson said. “This is one of Sharp’s first interactions with U.S. lab and our hope is that we’re successful and that success could go into solar PV and other areas.” Solar PV will indeed be a major direction of the partnership as it progresses, according to Mark Cortez, Director of Marketing for Sharp’s solar energy division. Cortez said the depth and breadth of Sandia’s research facilities are a perfect fit for the company. “They have the ability to create test beds, constantly doing module and inverter testing,” Cortez said. “They are a great source of independent testing. When you bring something to them, you are going to get a real accurate representation of how it performs.” Among the initial solar research will be new explorations into agricultural applications for solar. All the recent growth in the solar field in the past few years, says Cortez, has been in the rooftop solar grid-tie market, but he says Sharp still recognizes rural, off-grid, remote power applications as a fertile business field. Sandia is also the world’s foremost research facility for the Concentrating Solar Power (CSP) field. A rebirth in the niche market has been under way in just the last few years, fueled by technology advances, energy price increases, and federal tax credits. A recent solar energy report from the respected equity research firm Piper Jaffray said that because of the tight silicon supply market, “Sharp does not expect to grow its polysilicon wafer production in 2006 and is focusing its efforts on thin-film and concentrator technologies.” The report said the silicon situation is similarly affecting other manufacturers around the globe as well. Cortez was mum about whether or not Sharp would pursue any research and development with Sandia laboratory on CSP but said there are tremendous new applications for industrial scale technology, including state RPS laws that mandate electric utilities use a certain percentage of their power from renewables like solar. He did confirm the silicon situation has affected Sharp’s solar division and its plans for expansion. “When they say we’re not going to increase capacity, I think that’s true,” Cortez said. “There’s no sense in building a bigger building when you don’t have enough chairs to put in it. We recently expanded our Memphis, TN, facility to 60 MW, but we will be hampered by the silicon shortage. It’s reasonable to say that we will not increase capacity, instead we will focus on development of working technology.” Cortez did say the company is excited about its prospects in bringing thin film solar products to market. He says the company has some thin film solar under development that competes with traditional silicon-based PV, particularly when factoring in the higher efficiency degradation that affects solar PV when under high temperatures. Cortez clarified that while the silicon situation is predominantly described as a silicon shortage, it is more accurate to say that the markets are growing faster than the supply can handle. There’s far more silicon available this year, he says, than last year and years before, but the demand curve has shot straight up faster than the supply can keep up with. It’s partly for this reason, Cortez says, that it makes sense to find and develop technology that strays away from that situation. Mike Orshan, Director of Science and Technology for New Mexico’s Economic Development Agency said he would like to see the Sandia Partnership with Sharp bring about some new manufacturing opportunities for the state but that for now, it would just be a research and development arrangement. In the future, Orshan said it is expected that both New Mexico State University and Los Alamos National Laboratories will become involved in this research collaboration. “It started out with the Governor’s effort, and we were able to be a liaison between assets of New Mexico and Japan. And there’s something good about that type of approach,” Orshan said.