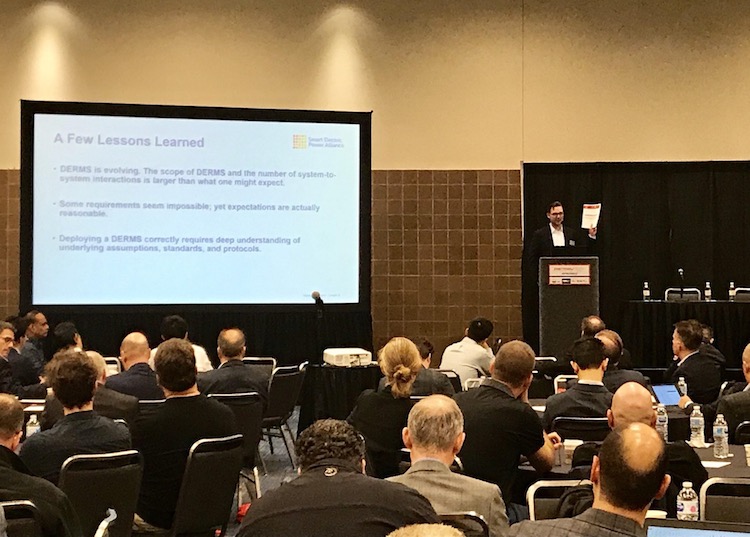 Just the number of acronyms, abbreviations and jargon in the headline for this article ought to offer a tiny glimpse into the complexity surrounding the deployment of Distributed Energy Resource Management Systems (DERMS). On Monday, during DistribuTECH, the Smart Electric Power Alliance (SEPA) held a grid management working group meeting to discuss what requirements are necessary for successful DERMS deployment.

“We went line-by-line through the entire document,” said Andrew Cotter, Senior Manager of Technical Service at SEPA. Cotter said that a group of 60+ people from utilities, vendors, consultants, academia, and others provided input on version 2.0 of the document. The new version added about 100 new requirements as well as added assumptions, definitions and practical use cases.

Cotter outlined three of the “lessons learned” that he identified from having worked on the new document. First, he said “the scope of DERMS is evolving and the number of system-to-system interactions is larger than one might expect.” He added that that statement “was probably the biggest understatement that he has ever put in a PowerPoint in his career.”

Other lessons learned were that some requirements seem impossible, yet expectations are actually reasonable and that deploying DERMS correctly requires deep understanding of underlying assumptions, standards and protocols, said Cotter.

And of course, all of that makes sense. It is predicted that between 20-40 million different devices (solar PV, EV chargers, batteries, smart thermostats, controllable water heaters and air conditioners, etc) could be attached to a single distribution grid.  Coming up with a system that can manage and control them is a mighty task.

Scott Koehler, Vice President of Global Strategy for Schneider Electric’s Smart Grid IT division, who participated on a panel at the meeting, said that one company will not be able to come up with a solution alone. He said that when you are trying to define DERMS, it’s good to have lots of ideas at the table. Koehler added that utilities are all starting at different points and that its ok for them to tackle the momentous task of DERMS deployment slowly.

The panelists agreed that starting with a need that you are trying to solve was the best way to attempt a DERMS deployment. They also cited the importance of flexibility, a system that can grow with the evolving landscape of DER is key.

While utilities are used to planning very far out — think 10- and 25-year horizons — the horizon for DERMS deployments is much shorter. They should begin by thinking about what they need immediately and plan to implement a system that will solve an immediate problem and then grow over time.

After the panel discussion attendees gathered in small groups to brainstorm the benefits of DERMS and the business risks to their deployment.