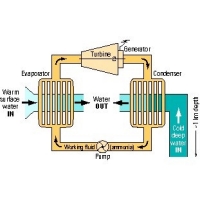 Washington, DC, United States [RenewableEnergyWorld.com] “The current energy crisis is fueling a worldwide search for power. Energy explorers are discovering that the largest reserve of potential energy covers more than 70 percent of the Earth’s surface—the oceans.” Replace “energy crisis” with “climate crisis,” and these words could be pulled from the websites of any of several companies that are now looking to generate clean electricity from the heat stored in the oceans.

But these words were actually spoken nearly 30 years ago in a video showing the deployment of a vast plastic pipe, first snaking along a Hawaiian beach and then being towed out to sea. This pipe was a crucial part of the first power plant of its kind to tap into the energy in the seas, through a process called ocean thermal energy conversion.

In 1979, when this power plant was built, oil prices were near an all-time high and the United States had been searching for alternative sources of energy for almost a decade. The main goal then was energy independence: U.S. policymakers wanted to ensure the country’s energy supply rather than rely on oil bought from hostile countries.

“We might very well have had a fleet of ocean thermal plants by now,” says Robert Cohen, who in the 1970s was the first manager of the U.S. Department of Energy’s research on ocean thermal energy. “We were headed toward that under the Nixon, Ford, and Carter administrations. But the Reagan administration was not friendly to renewables, especially ocean thermal. They pulled the rug on our funding.” Since then, plans for harnessing this technology have lain largely dormant. As Cohen puts it, “It’s become an orphan technology.”

But now the orphan is finally being adopted. With growing awareness of the vast amounts of clean energy that the planet needs to keep the global economy spinning while avoiding a climate catastrophe, companies and governments are again at work on harnessing ocean thermal energy. But this time these efforts are backed by new technologies—many from a seemingly unlikely sector, the offshore oil industry—that may finally make it practical and affordable. “Ocean thermal could become a big source, possibly the biggest global source of renewable energy,” Cohen says.

Estimates of the size of this energy source vary widely, but even a conservative tally figures it could sustainably produce more electricity than the whole world consumes today. The technology has some spin-offs that are already commercially viable, and others that could become so soon, including low-cost air conditioning for buildings, desalination for turning seawater into drinking water, and fish farms fed by the nutrient-rich water from the deep.

But ocean thermal energy conversion (OTEC) still has to prove itself. So far it has been tested only in small pilot projects, and no one has built a commercial power plant. Now, with a few plants in various stages of planning, OTEC may finally get a shot at competing with other sources of clean energy (such as solar, wind, geothermal, and tidal) to show whether it can match up, or even beat them.

In some ways, harnessing ocean thermal energy requires only the simplest of gadgetry: plastic and metal plumbing for carrying the water and exchanging heat between the warm and cold streams, and turbines for generating electricity. Yet in practice, building a robust power plant — one that can stand up to corrosive salt water, hurricanes, and microbial scum that seems to grow everywhere — requires a lot of ingenuity, patience, and money. Gérard Nihous, an ocean engineer at the Hawaii Natural Energy Institute, says, “The principle is elementary, but the practical application is a headache.”

The energy behind OTEC is sunlight. The oceans’ surface waters absorb it in prodigious amounts and store the energy as heat. In hurricanes, cyclones, and typhoons, this pent-up heat comes pouring back out in spiraling convulsions of wind and rain. To harness the energy for useful ends, OTEC systems need not just heat, but a way to make that heat move in a controlled way. That’s where one of the great challenges of ocean thermal energy conversion comes in: it requires large amounts of cold water as well. OTEC systems tap into a store of cold water that’s available around the world (see map, below).

“Here in Hawaii, it’s miraculous that if I drop a few hundred meters, it is so cold,” Nihous says. “It shouldn’t be. It’s only because of this deep circulation,” a vast current that winds around the whole globe, known as the great ocean conveyor. By sticking a very long pipe down into the conveyor’s depths, its cold water can be pumped up to the surface. When the cold and warm water are piped separately through a device called a heat engine — basically, a refrigerator that runs in reverse — it generates electricity.

The most likely way of doing this is the so-called closed system, in which the stream of warm surface water flows past a system of tubes containing some kind of refrigerant — a liquid that boils somewhere close to room temperature, such as ammonia. Shallow water in the tropics is warm enough to boil the refrigerant, producing a jet of vapor that pushes through a turbine, spinning it to generate electricity. Then the cold, deep-ocean water runs past the vaporized refrigerant to cool it and turn it back into a liquid, recycling it so it can run through the device again and again.

But to get much juice out of a system like this requires veritable rivers of both warm and cold water. A 100-megawatt OTEC plant (about one-tenth the size of a typical coal-fired power plant) would need several thousand liters of water flowing through it per second. According to Nihous’s estimates, producing electricity at the rate it’s used worldwide today — about 2 terawatts, or 2 trillion watts — would require a flow of cold water more than 10 times greater than that coursing down all of the world’s rivers combined. And in the future, if development continues at the current fast pace and the world moves from dirty fuels to green energy, we’ll need dozens of terawatts of clean electricity.

In part 2 of this article, we’ll look at some pilot OTEC installations around the globe.

Mason Inman is a freelance science journalist currently based in Karachi, Pakistan.

This article originally appeared in World Watch Magazine May/June 2009 and is reprinted by permission.