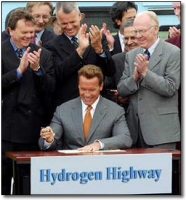 Sacramento, California – April 22, 2004 [SolarAccess.com] Schwarzenegger unveiled the California Hydrogen Highways Network at UC Davis through the signing of an executive order creating a public and private partnership to build a Hydrogen Highway in California by 2010. The governor drove a hydrogen-powered fuel cell car to the event and refueled it at UC Davis’ new hydrogen fueling station — the first publicly accessible station on California’s Hydrogen Highway. He is the first member of the general public to use it. “This is the future of California and the future of our environmental protection,” Schwarzenegger said. “This starts a new era for clean California transportation.” He was joined by UC Davis Chancellor Larry Vanderhoef and members of his cabinet, CalEPA Secretary Terry Tamminen, Resources Secretary Mike Chrisman, and Business, Transportation and Housing Secretary Sunny McPeak. Schwarzenegger’s administration described the Hydrogen Highway initiative is a down payment on securing California’s future in the areas of air quality, public health, energy security, and national security. They added that the citizens of California have endured frequent gasoline price spikes and the State is facing critical shortages in refining capacity, which will drive prices even higher. The governor’s executive order said that even after years of improvements in vehicle emissions technologies and effective emissions regulation, California has some of the worst air quality in the country and much of the State of California does not meet state or federal health-based air quality standards which could put the state at risk of not meeting federal air quality “attainment” status and could thereby lose billions of dollars in federal funds. A report conducted jointly by the California Energy Commission (CEC) and the Air Resources Board (ARB) found that California’s oil refining capacity has not been able to keep up with growing demand for fossil fuel and that the state faces a future of increasing petroleum dependence, supply disruptions, and rapid and frequent price volatility. The report concluded that without major efforts to reduce petroleum dependence, meeting future petroleum needs would require that California accept major expansion of refining capacity, delivery infrastructure and increased dependence on foreign energy supplies. “Californians invent the future and we are about to do it again,” Governor Schwarzenegger said. “We can deal with these problems by investing in a clean hydrogen future, thus bringing jobs, investment, and continued economic prosperity to the state. We have an opportunity to prove to the world that a thriving environment and economy can co-exist. This vision for California is real and attainable; however, it will take time so we must plant the seeds now.” The goal of the California hydrogen Highway Network initiative is to support and catalyze a rapid transition to clean hydrogen transportation economy in California. “To expedite the transition of our transportation system away from petroleum fuels, towards hydrogen fuel and vehicles, experts point to the crucial need for a hydrogen fueling infrastructure and the necessary leadership to make it a reality,” said Secretary Tamminen. An early network of only 150 to 200 hydrogen-fueling stations throughout the State (approximately one station every 20 miles on the State’s major highways) would make hydrogen fuel available to the vast majority of Californians.

Pictured above, Governor Schwarzenegger becomes the first person to fuel up a hydrogen-powered fuel cell vehicle at California’s first publicly accessible station on California’s Hydrogen Highway. The governor’s order commits California to achieve the following by 2010: – The state will commit to negotiate with auto makers and fuel cell manufacturers to ensure that hydrogen-powered cars, buses, trucks, and generators become commercially available for purchase by California consumers, businesses and agencies including state, regional and local. – California’s state vehicle fleet will include an increasing number of clean, hydrogen-powered vehicles when possible to be purchased during the normal course of fleet replacement. – Safety standards, building codes and emergency response procedures for hydrogen fueling installations and operation of hydrogen-powered vehicles will be in place and permit agencies, building inspectors and emergency responders will receive appropriate training. – Appropriate incentives will be provided to encourage the purchase of hydrogen-powered vehicles and to encourage the development of renewable sources of energy for hydrogen production. Just how exactly all the governor’s plans will shake is yet to be determined. The governor’s order effectively begins the research effort on the initiative. The California Environmental Protection Agency, with the State Legislature, and in consultation with the California Energy Resources Conservation and Development Commission and other relevant state and local agencies, are now committed to developing a California Hydrogen Economy Blueprint Plan for the rapid transition to a hydrogen economy in California due January 1, 2005, and to be updated bi-annually from then on containing recommendations to the Governor and the State Legislature. While the governor’s executive order described hydrogen, as a non-carbon energy carrier “which can be made from clean renewable energy”, it did not necessarily commit to a certain method for the production of hydrogen. The upcoming blueprint plan will likely be the first formal indication whether the initiative will indeed produce the hydrogen from renewable energy or fossil fuels as is the most common method today. The California Fuel Cell Partnership and others estimate that this initial low-volume fueling network will cost approximately $90 million, the majority of this investment coming from private investment by energy companies, automakers, high-tech firms, and other companies.