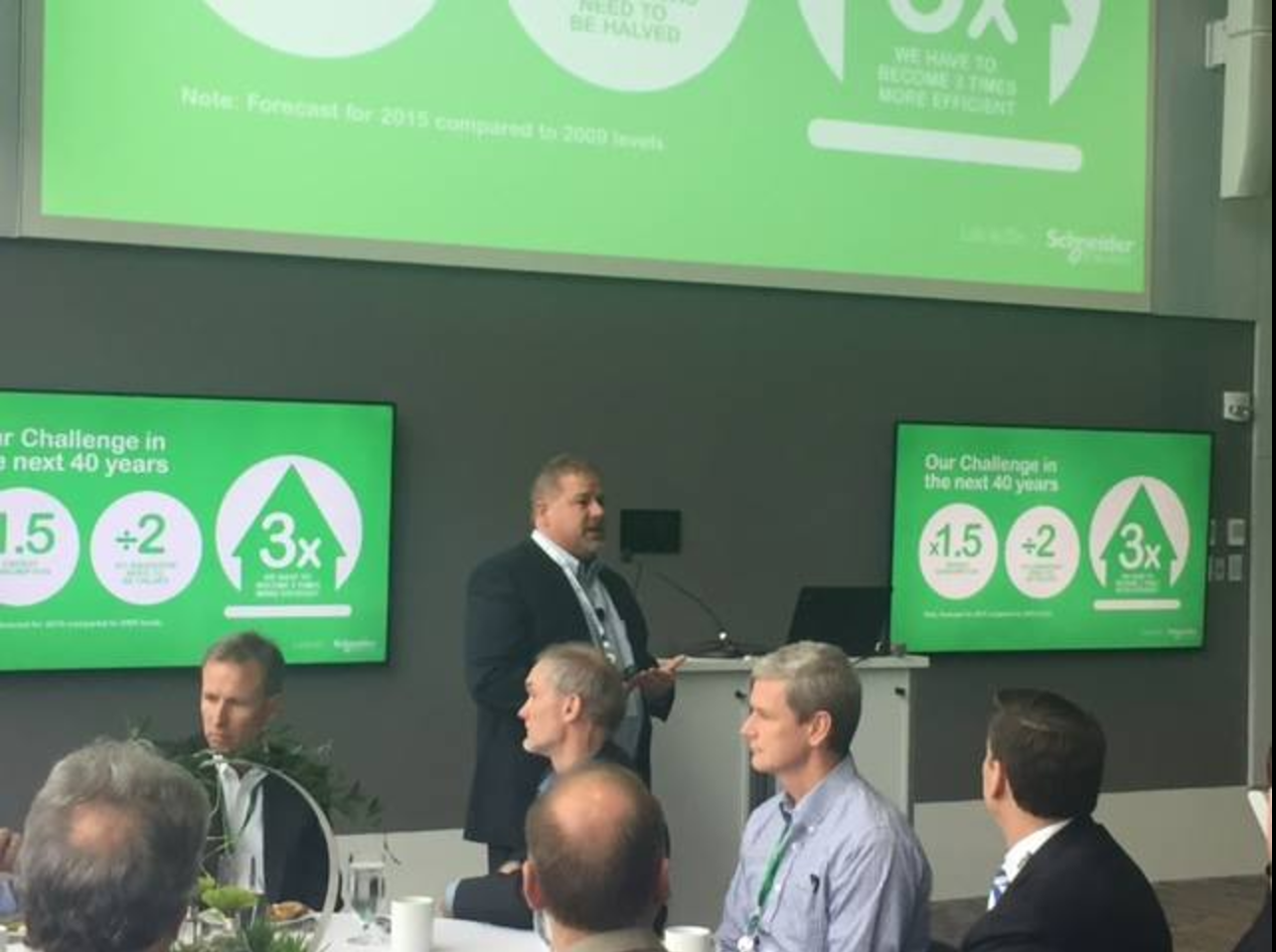 Last week, Schneider Electric brought media, analysts and partners to its Boston One Campus (BOC), the company’s North American headquarters in Andover, Massachusetts, to unveil what it is calling its new “advanced microgrid.”

With the microgrid, the BOC is able to completely detach from the grid and draw all of its power from the onsite generation, which includes about 448 kW of rooftop and carport PV and a gas generator. During the media and analyst event, Andy Haun, the CTO of the company’s North American microgrid business unit, demonstrated how the system responds to signals from the grid and/or weather events that would cause it go into island mode. During lunch, the building went dark and then was repowered with onsite power.

The energy landscape is changing under the increased pressure of urbanization, digitization and industrialization and Schneider believes that today energy users are placing a premium on resiliency from power disruptions in addition to demanding more renewable energy. Distributed energy resources (DER) such as solar PV and batteries and demand response solutions are increasingly in demand.

At the heart of the BOC microgrid is Schneider Electric’s new Electric Energy Control Center, a modular, scalable power control center that brings together the hardware, software, advanced controls and electrical distribution needed to operate DER in a single box. The company showcased the new product, which will be commercially available in 2018, on the tour (although it is taking orders for it now).

The BOC microgrid was built by Schneider Electric and REC Solar, a subsidiary of Duke Energy Renewables. The microgrid was funded through a new “Microgrid as a Service (MaaS)” business model, which Renewable Energy World covered last year when the project was first unveiled. Duke Energy is the project’s investor/owner.

“With the growth in the availability of affordable renewable energy and other distributed energy resources, energy consumers are more empowered than ever to use microgrids to generate and manage their consumption through active involvement in the market,” said Mark Feasel, Vice President, Utility Segment, Smart Grid & Microgrid, Schneider Electric (see photo above). “Schneider Electric used this model at BOC to build an advanced microgrid that reduces costs, incorporates more sustainable energy and takes control of its energy future. It will also be a living laboratory at our North American R&D hub, driving global innovation in energy storage and distributed energy resource management solutions.”

The advanced microgrid includes 1,379 Solar World solar modules, as well as inverters that convert 448 kilowatts (kW) of direct current from solar to alternating current that powers the system. Additionally, the advanced microgrid uses a natural gas generator as an anchor resource, allowing the entire solar array to operate during grid outages — maintaining critical operations and offering employees a safe, shelter in place option. The company said its system is expected to generate more than 520,000 kilowatt-hours (kWh) of electricity per year.