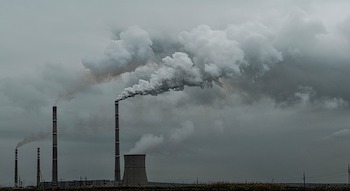 After the United Nations’s first attempt to build a global carbon market fizzled from $33 billion to almost nothing, climate envoys from nearly 200 countries are meeting in Bangkok this week to give it another go.

The diplomats gathered in Bangkok this week are working on a so-called Sustainable Development Mechanism that would channel investment into projects that cut pollution in some of the poorest countries of the world. Richer nations that provide much of the finance would get credits in exchange that go to help meet their commitments on reducing emissions, which may allow them to take on more ambitious goals.

The talks are part of a push to set out the rules governing the landmark Paris Agreement on climate change, where nations rich and poor alike vowed to cut greenhouse gas emissions for the first time. To developing nations such as Brazil, which is pushing for the mechanism, a deal would have the potential to raise billions of dollars to clean up energy production and bring in entrepreneurs like the founder of Tesla Inc.

“To transform billions into trillions, you have to send the right signal so that early movers are recognized,” Thiago Mendes, climate change and forestry secretary in Brazil’s Ministry of Environment, said in an interview. “We want to have an ‘Elon Musk guy’ in all countries.”

The SDM as it is known for short would replace the CDM, or Clean Development Mechanism, which was born with the UN’s Kyoto Protocol on climate change in 1997. World leaders endorsed the principle of building the SDM when they approved the Paris deal in 2015 but left it to lower-level officials to agree on the details.

Those delegates were forced to organize an additional meeting in Bangkok until Sept. 9. They’re hoping to develop a proposal that their ministers can endorse at the annual UN climate meeting, which this year is being held in December in Katowice, Poland. Technical discussions are continuing on how the new mechanism will work.

“It’s indeed one of the issues being discussed, and we still don’t know, sadly, what’s going to come,” Patricia Espinosa, the UN representative helping coordinate the meeting, said in an interview in Bangkok on Monday. “There are different views among the parties and at the same time what we’re seeing are a lot of developments regarding carbon pricing and carbon markets in different parts of the world.”

Initially backed by the U.S., the CDM gave markets a central role to play in slashing emissions by handing an incentive for rich countries to pay for projects to lower emissions in developing ones. China was the biggest beneficiary. The work generated credits that were sold to polluters in industrial countries mainly in Europe, who found CDM offsets a cheaper way to meet their environmental obligations than closing down their most dirty plants.

By some measures, the CDM worked. It created more than 8,000 projects across 114 nations, that will reduce carbon emissions by about 10.3 billion tons by 2020, or the equivalent of what the U.S. releases in 1 ½ years, according to UN data. Those projects brought investment of more than $300 billion to developing nations, which in turn sold credits valued at about 22 billion euros ($25 billion) to industrial nations.

Europe bought most of those credits for use in its emissions-trading system, which started in 2005 and now trades securities valued at more than 60 billion euros a year. When recession hit a decade ago, industrial production collapsed in the region and took down pollution levels, reducing demand for allowances already hurt by expensive subsidies for solar and wind power. Swamped with credits also from outside the region, prices in Europe’s carbon market plunged.

Lower prices in Europe’s carbon market relieved pressure on companies to cut emissions and reduced the value of the system. Authorities have spent the years since the recession working to reduce the number of permits and they’ve also choked off the ability of the CDM credits to cover environmental targets in the emissions market.

The result: Prices of CDM credits have languished below 1 euro a metric ton since 2012 after trading as high as 23.38 euros in 2008. Prices have risen to 29 euro cents from 18 cents in the past six months, and there’s a chance that talks culminating this year will spur further advances, according to Stefano De Clara, director of international policy at the International Emissions Trading Association, which lobbies for carbon pricing.

Brazil expects carbon market demand under Paris will be “much higher” than under Kyoto, according to an emailed reply to questions from the environment ministry.

The transition away from the CDM to the Paris framework is a “key priority” for envoys to sort out this year in order to unlock the flow of money to green projects, De Clara said Tuesday from Bangkok. It’s still not clear how the new SDM will relate to existing CDM credits — or whether the new system will even create liquid markets.

There’s still a chance existing credits may die. Countries may prefer to use bilateral emission-reduction deals, also allowed by Paris, instead of the SDM, IETA said.

Envoys must agree on:

Transparency in terms of how the new SDM credits are created and tracked Verification methods to show how much emissions are avoided by each project Oversight of the program, including what organization of individuals will maintain and enforce the rules governing the SDM How buyers and sellers of SDM credits will account for trades in relation to their emission-reduction pledges over time Interlinkages, as in whether the credits will be valid and tradable into other carbon markets, like the European Union Emissions Trading System or programs in the U.S. and China.

Like other strands of the UN climate talks, the discussion about the SDM is complicated by finger-pointing between richer and poorer nations about who should move first on climate change and complex debates about who should pay to edge the world away from fossil fuels.

President Donald Trump’s vow to pull the U.S. out of the Paris deal has eroded momentum behind the talks, said Eirik Waerness, chief economist of the Norwegian oil company Equinor ASA.

“It requires an enormous amount of understanding and trust that we’re in the same boat — across countries, across markets, across industries,” Waerness said. “Is the trust there? Right now, no. We’re very far away.”