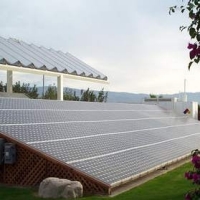 California, United States [RenewableEnergyWorld.com] A team of Los Alamos researchers led by Victor Klimov has shown that carrier multiplication — when a photon creates multiple electrons — is a real phenomenon in tiny semiconductor crystals and not a false observation born of extraneous effects that mimic carrier multiplication. The research shows the possibility of solar cells that create more than one unit of energy per photon.

When a conventional solar cell absorbs a photon of light, it frees an electron to generate an electrical current. Energy in excess of the amount needed to promote an electron into a conducting state is lost as heat to atomic vibrations (phonons) in the material lattice. Through carrier multiplication, excess energy can be transferred to another electron instead of the material lattice, freeing it to generate electrical current — thereby yielding a more efficient solar cell.

Klimov and colleagues have shown that nanocrystals of certain semiconductor materials can generate more than one electron after absorbing a photon. This is partly due to strengthened interactions between electrons squeezed together within the confines of the nanoscale particles.

In 2004, Los Alamos researchers Richard Schaller and Klimov reported the first observations of strong carrier multiplication in nanosized crystals of lead selenide resulting in up to two electron-hole pairs per absorbed photon. A year later, Arthur Nozik and coworkers at the National Renewable Energy Laboratory reproduced these results. Eventually, spectroscopic signatures of carrier multiplication were observed in nanocrystals of various compositions, including silicon.

To analyze how a particular detection technique might affect an outcome, John McGuire, a postdoctoral researcher on Klimov’s team, investigated carrier multiplication using two different spectroscopic techniques-transient absorption and time-resolved photoluminescence. The results obtained by these two methods were in remarkable agreement, indicating that the use of different detection techniques is unlikely to explain discrepancies highlighted by other researchers. Further, although these measurements revealed some sample-to-sample variation in carrier multiplication yields, these variations were much smaller than the spread in reported data.

After ruling out these two potential causes of discrepancies, the researchers focused on effects that could mimic carrier multiplication. One such effect is photoionization of nanocrystals.

“When a nanocrystal absorbs a high-energy photon, an electron can acquire enough energy to escape the material,” Klimov explained. “This leaves behind a charged nanocrystal, which contains a positive ‘hole.’ Photogeneration of another electron by a second photon results in a two-hole, one-electron state, reminiscent of one produced by carrier multiplication, which can lead to false positives,” he said.

To evaluate the influence of photoionization, the Los Alamos researchers conducted back-to-back studies of static and stirred solutions of nanocrystals. Stirring removes charged nanocrystals from the measured region of the sample. Therefore, when crystals are subjected to light, the stirring eliminates the possibility that charged nanocrystals will absorb a second photon. While stirring of some samples did not affect the results of the measurements, other samples showed a significant difference in the apparent carrier multiplication yields measured under static and stirred conditions. Since most previous studies were performed on static samples, these results suggest that discrepancies noted by other researchers arise at least in part from uncontrolled photoionization, which stirring seeks to eliminate.

The Los Alamos researchers re-evaluated carrier multiplication efficiencies when photoionization was suppressed. The results are encouraging.

While the newly measured electron yields are lower than previously reported, the efficiency of carrier multiplication is still greater than in bulk solids. Specifically, both the energetic onset and the energy required to generate an extra electron in nanocrystals are about half of those in bulk solids.

“Researchers still have a lot of work to do,” Klimov cautioned. “One important challenge is to figure out how to design a material in which the energetic cost to create an extra electron can approach the limit defined by a semiconductor band gap. Such a material could raise the fundamental power conversion limit of a solar cell from 31 percent to above 40 percent.”

James Rickman is a writer and photographer at Los Alamos National Laboratory. Subject matter for his articles runs the gamut from space sciences to superconductivity as well as environmental research and other more-grounded subjects.