Pike Research just released a report on the Total Cost of Ownership of Alternative Fuel Vehicles for Fleet Operators. The report compares the purchase price plus lifetime fuel cost of mid-sized cars available in the US.

Although the authors hesitate to declare any alternative fuel the cheapest option, the chart below clearly shows that the “BEV-100″ (Battery-Electric with 100-mile range, a.k.a. the Nissan Leaf) to be the least expensive option even at high electricity prices ($0.14/kwh) and low gas prices ($3/gallon.)  However, the Leaf only has a clear lead when the $7,500 tax credit is taken into account. 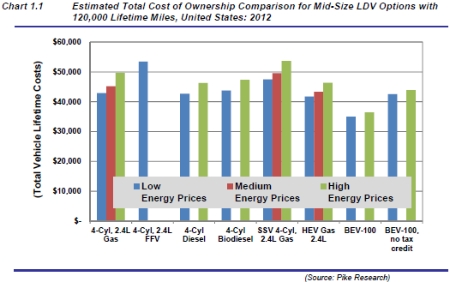 The other vehicles in the chart are (from left to right):

Also compared in the report (but not shown in the chart) were natural gas (CNG), plug-in hybrid (PHEV) vehicles, and also vehicles of various sizes.  The following chart shows the total cost of ownership of these at today’s fuel prices. 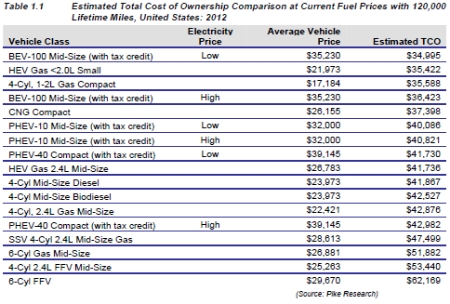 So Cost-Conscious Fleet Managers Should Buy the Leaf?

Even with the tax credit, there are a few caveats.

Conclusion: Get the Prius

After I make back-of-the envelope adjustments to the report’s results for maintenance, charging infrastructure, and the time value of money, the plug-in Toyota Prius (PHEV-10) seems to have the lowest cost of ownership in most cases among mid-size vehicles.

Fleet operators with low cost of funds (discount rates) will still prefer the Leaf, while operators with relatively high costs of funds will find normal hybrids to be the most cost effective mid-sized cars.

Even cheaper options exist with the largest cost savings coming by down-sizing to a small or compact car, especially if it is a hybrid.