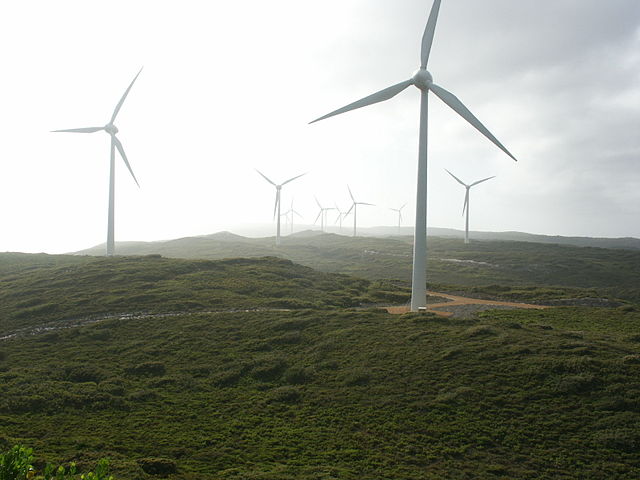 Renewables energy investment in Asia excluding China will overtake spending on upstream oil and gas projects in the region as soon as next year, according to Rystad Energy.

Total capital expenditure (capex) in renewables will overtake exploration and production (E&P) spending in 2020, with contributions from Australia and other Asian countries such as Vietnam, Taiwan and South Korea, Rystad Energy’s latest bottom-up analysis of investments shows.

“These countries each have strong pipelines for renewable energy developments of all types, including offshore wind,” says Gero Farruggio, Head of Renewables at Rystad Energy. “And, importantly, most have large targets outlining the inclusion of renewable power sources within their respective energy mixes, with corresponding support policies.” 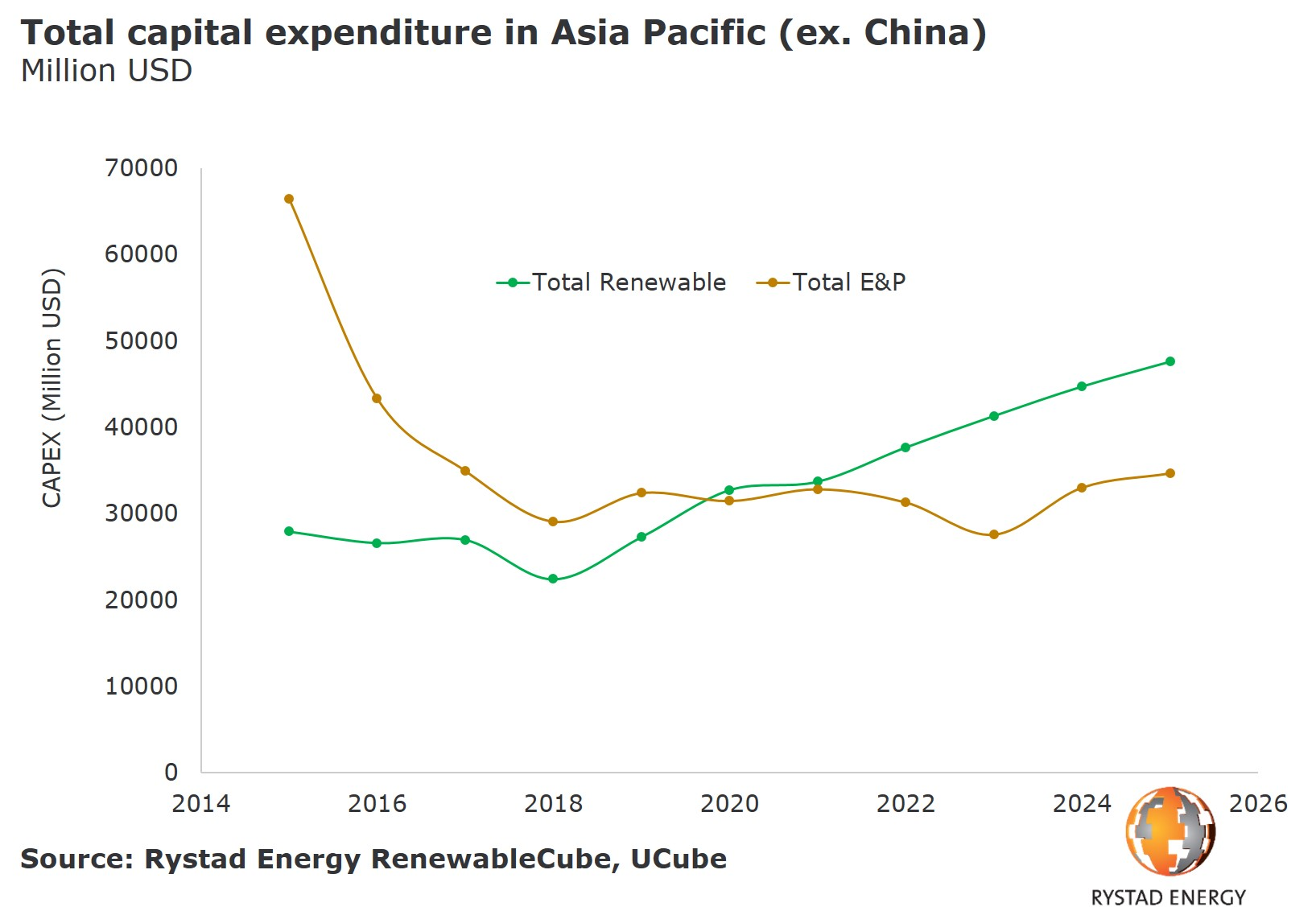 As oil and gas professionals descend on Brisbane for the annual APPEA conference, renewable energy continues to rise up the agenda. In a presentation, Farruggio outlined the drivers for this and what we can expect within renewables from upstream players going forward.

In Australia, the renewable energy project pipeline is now over double the national electricity market. Only 1% of the country’s solar, wind and utility storage projects is currently owned by oil majors. Rystad Energy, the independent energy research and consultancy in Norway with offices across the globe, forecasts that this is likely to change.

“By 2020 it is feasible that the majors will be the dominant renewable developers in Australia as they pursue ‘oil and gas’ scale opportunities. Commercial drivers are increasing the desire to ride the ‘solar-coaster’,” Farruggio remarked. 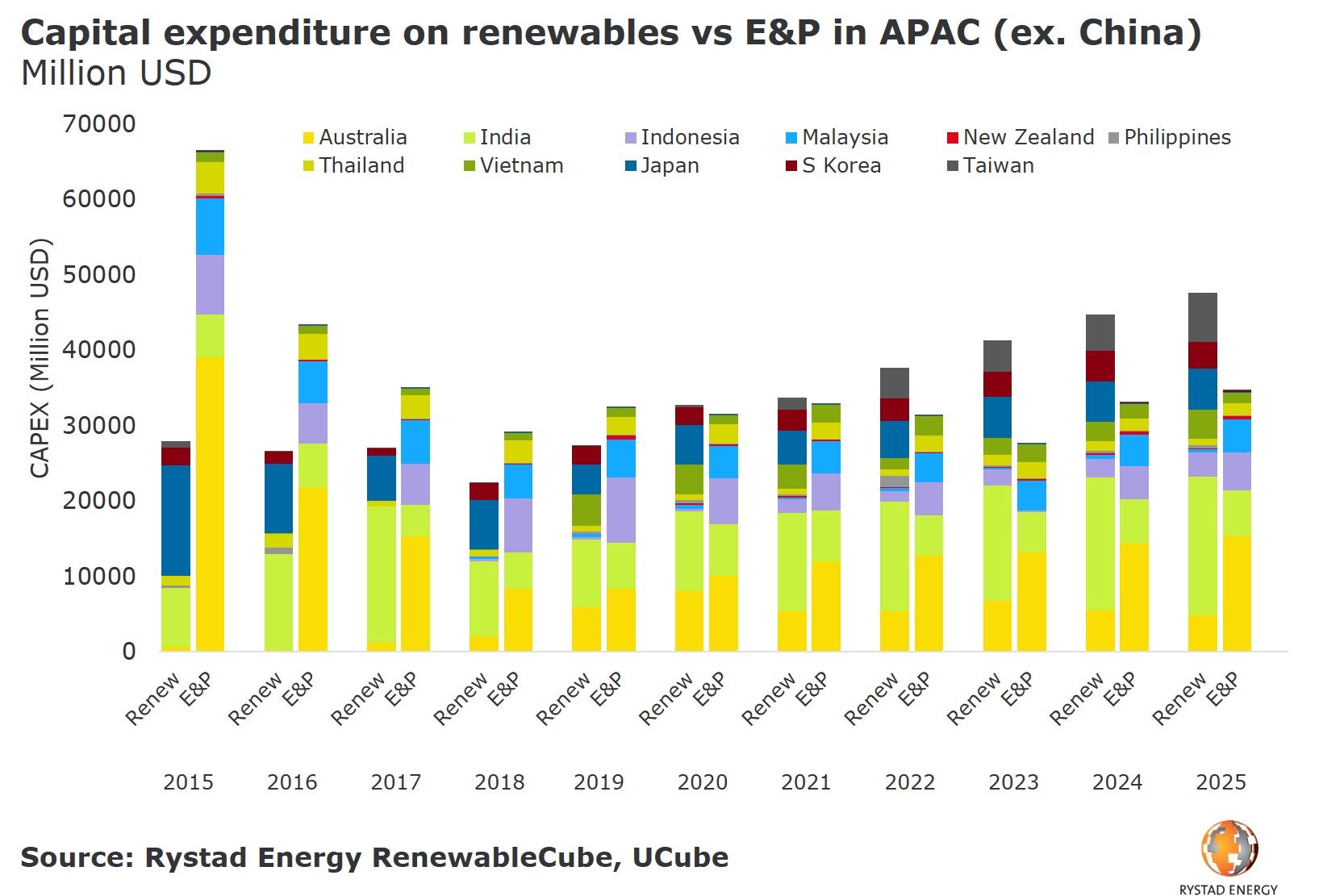 Rystad Energy expects renewables in Australia will continue the strong growth seen in 2018 through 2020, although the country still faces the local challenge of transmission losses, which impacts revenues and creates policy uncertainty. However, investor confidence is high in Australia, and the country currently has a development pipeline of over 105 GW of solar, wind and storage projects, as well as a fleet of aging coal-fired power stations which will require replacement.

The growth in India’s renewables presents significant scale and one to watch.

“It is no surprise that Petronas and Shell have recently made moves in the Indian C&I renewables space,” Farruggio said.