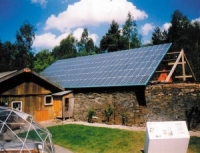 London, UK [RenewableEnergyWorld.com] A new report by the analysis firm Poyry and commissioned by WWF and Greenpeace concludes that renewables and energy efficiency could plug the so-called “energy gap” that the UK faces as aging coal and nuclear generators retire.

The report finds that, if the UK government is able to achieve both its commitments to meet EU renewable energy targets and its own ambitious action plan to reduce demand through energy efficiency, then major new thermal power stations would not be needed to ensure that Britain meets its electricity requirements through at least 2020. Moreover, the report finds that this strategy would reduce the country’s carbon dioxide emissions by up to 37% by the same date.

The Pöyry analysis considered six scenarios for meeting Britain’s commitments to the binding EU renewable energy commitments for 2020, and for future electricity demand. It concluded that there would be no role for new coal and gas-fired plants, even taking into account the very few days when there is little or no wind.

“This report should be good news for the government. If it gets real on its targets on renewables and energy efficiency then we can keep the lights on, reduce our reliance on expensive fossil fuel imports and dramatically cut our carbon emissions,” said Keith Allott, head of climate change at WWF-UK.

In the period after 2020 when more of the UK’s existing coal and nuclear plants are due to close, the report observes that a number of further options could be deployed, including highly efficient industrial CHP plants, further roll-out of renewables and, potentially, carbon capture and storage.

“Here is solid evidence that energy efficiency and renewables alone can put the UK on a secure footing, both for future energy supply and for mitigating climate change. It is hard to imagine how the public could be better served in these precarious times than by committing the UK to the wholly safe, sane and effective pathway this report sets out,” said Philip Wolfe, executive director of the Renewable Energy Association.