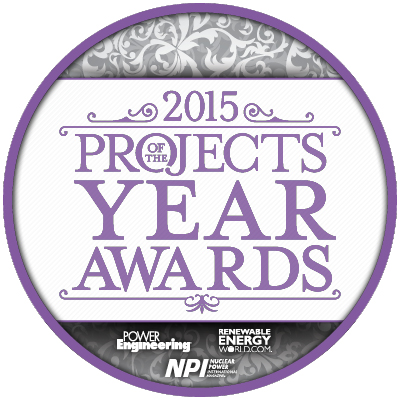 On Monday, Renewable Energy World and Power Engineering announced the finalists for the 2015 Project of the Year Awards. Projects are nominated by the industry and finalists are selected by a committee of editors from PennWell Corporation.

To be eligible for an award, a project needed to have come online between August 1st, 2014 and July 31st, 2015 and been nominated by someone familiar with it. Editors from Renewable Energy World and Power Engineering review each nominated project and select the finalists based on how well the project represents innovation in the industry, overcame hurdles to development and engaged with the surrounding community.

The two finalists will be invited to attend a gala awards banquet on Monday, Dec. 7, at the KMA Event Center in Las Vegas, Nevada, to kick off Power Generation Week, which features four conferences focused on the power sector. During the gala, the winning Renewable Energy Project of the Year will be announced.

The finalists for the 2015 Renewable Energy Project of the Year showcase the global evolving energy landscape and represent innovations in how renewable energy is being incorporated into the grid in the developed and developing world. 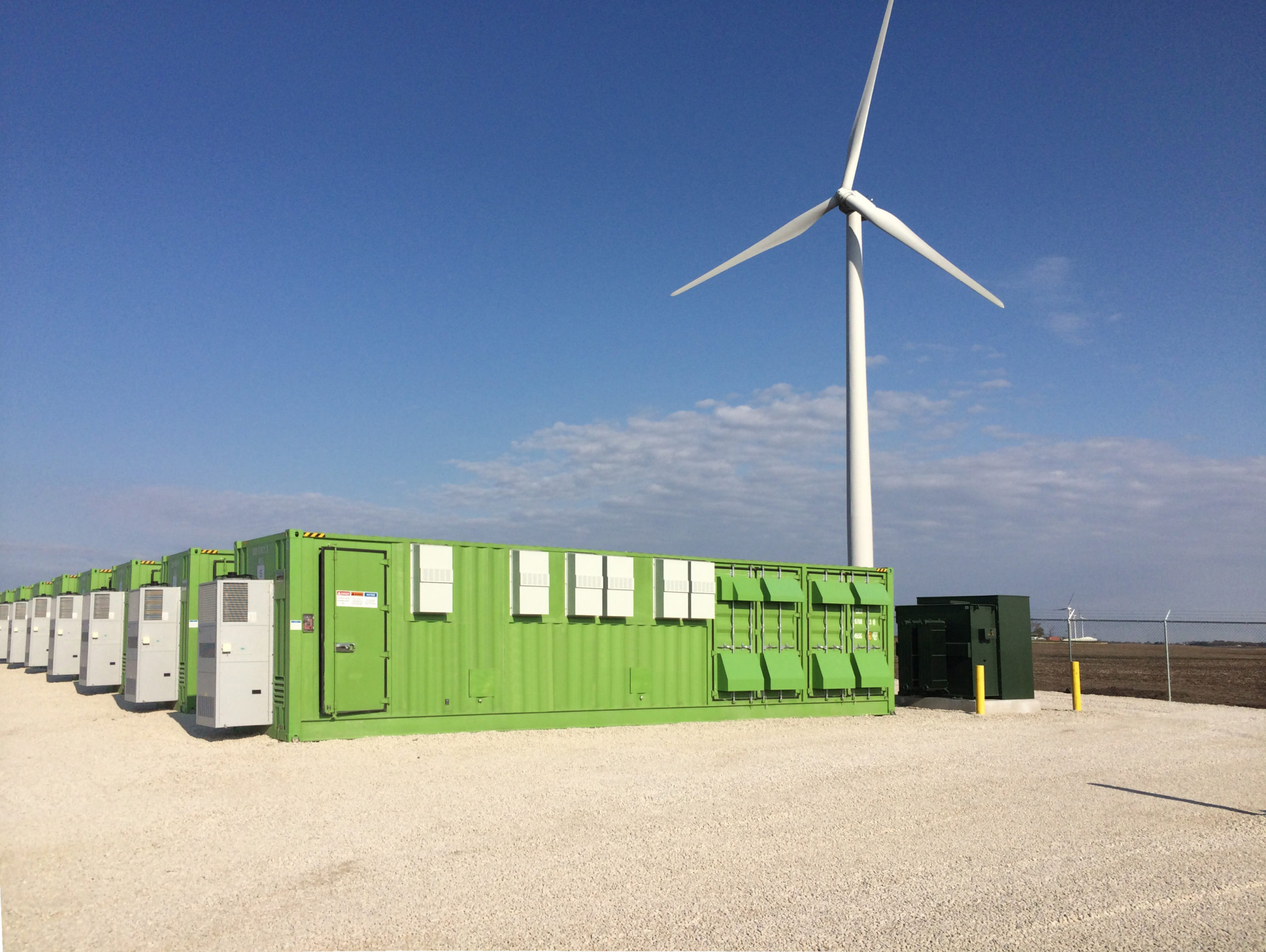 The Grand Ridge Energy Storage Center is a 31.5 MW lithium-ion battery system co-located at Invenergy’s Grand Ridge wind and solar farms. The project is the second largest lithium-ion battery storage system in the world. The project acts as both a generator and a load to provide grid operator PJM with the megawatts or “negawatts” it needs to balance supply and demand.

The Grand Ridge Energy Center represents a new class of grid assets to address the challenges of the 21st century grid, which is transforming at a rapid pace. Distributed generation, higher levels of renewables and fewer industrial loads mean that load is “peakier” than in the past. To address these challenges, grid operators need fast responding resource that can inject or withdraw power from the grid at a moment’s notice. The Grand Ridge Energy Storage Center provides the PJM grid operator the ability to inject or withdraw power from the grid in less than one second, thus offsetting the need for PJM to procure up to 3 MWs of traditional regulating resources. This results in a more efficient and reliable grid.

The project is part of the Invenergy’s renewable energy showcase at Grand Ridge. At the site Invenergy has 200 MWs of wind, 20 MWs of solar and 33 MWs of storage. Invenergy regularly hosts tours of the facility for schools, government officials, policy makers and industry stakeholders. Invenergy employs 18 employees at the Grand Ridge Facility, of which 2 are dedicated to the energy storage facility. The project adds $35,000 annually to the local tax base. Henkels & McCoy assisted with the project as well.

In addition to these two finalists, RenewableEnergyWorld.com is naming three projects that deserve honorable mentions for their first use of a new technology and the size and/or impact on the greater power industry. 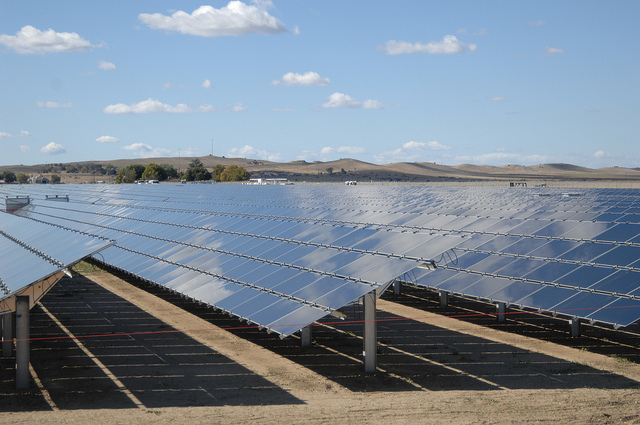 Utility-scale renewable energy projects are the most effective and lowest-cost way to reduce carbon emissions from the power supply. Upon completion in Oct. 2014, the 550-MW Topaz Solar Farms built by First Solar was the largest PV solar energy project in the world, and represented a major turning point in commercial energy generation. From inception, a project of this scale had never been attempted.

The project covers 10 square miles, features over 8.4 million PV modules and was one of the first utility-scale PV project to be financed without a U.S. DOE loan guarantee. Over the course of 5 years to develop and 3 years to construct, Topaz worked through complex issues that led to innovations that changed the way many utility-scale solar projects are developed/constructed today. Key to the development of Topaz was balancing biodiversity requirements with environmentally safe construction practices.

Topaz incorporates advanced capabilities to suppor grid stability and reliability. First Solar, the plant controller, is able to strike a balance of regulating real and reactive power output, resulting in electricity generation that behaves as a single-large generator. This allows coordination among the plant, the independent system operator and the energy off-taker to manage energy load onto the grid.

The Marine Corps Air Station (MCAS) Miramar project is a 100 percent renewable-powered microgrid, relying on both 230-kW of solar PV and 280-kW, 1-MWh Primus Power flow batteries. The microgrid helped MCAS Miramar reduce fuel oil use by 98 percent in 2014, more than any other base.  In addition to the reduced emissions, the microgrid provides provide energy security to the base, allowing it to operate independently from the grid in the event of a blackout.

Project developer Primas Power explained that the development of a microgrid is extraordinarily complex but to do so with only renewable power, which is variable, is even more so. Management of the loads, as well as the PV and battery is very difficult to achieve. In addition, the battery in place at MCAS Miramar is the first of its kind, using a single-tank, liquid electrolyte platform to deliver tens of thousands of cycles to the base.

The microgrid at Miramar was designed by partners Raytheon and the U.S. Department of Energy’s National Renewable Energy Laboratory and uses Raytheon’s Intelligent Power and Energy Management Microgrid Controller to manage renewable energy from the solar panels.

Honorable Mention: The Head of the U Hydro Project 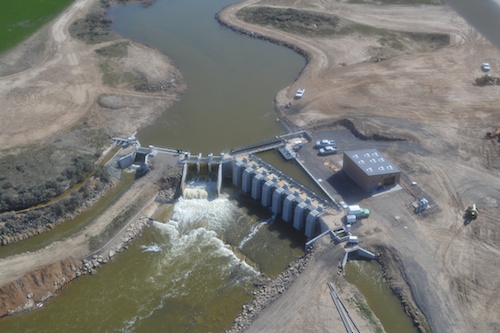 Consisting of eight Mavel MT10 Modular Micro Turbines installed at an irrigation canal diversion and drop structure, the Head of the U Hydro Project is located outside Jerome, Idaho and is the first application of Czech-American company Mavel’s MT10 micro turbines in the U.S.

The project consists of eight micro turbines installed at an irrigation canal diversion and drop structure. The diversion structure divides the flow of the main channel into three branch channels. Each generating unit consists of a Kaplan-type runner and an asynchronous generator connected by a belt drive. Each turbine, generator and draft tube assembly is installed on support brackets attached to the weir structure. The nameplate capacity of each unit is 160 kW for a total project capacity of 1.28 MW. The project operates six months per year and produces an estimated 4.2 million kWh of energy annually. The project also includes a building for the electrical switch-gear and control equipment and an adjacent switch yard for interconnection with the local grid.

The project is located in Southern Idaho where the local economy is anchored by irrigated agriculture. The main irrigation canal that the project is located on is owned and operated by the North Side Canal Company, which delivers irrigation water to 160,000 acres of farmland through 1,000 miles of canals and ditches. The growers that own the farmland where the irrigation water is applied, also own the canal company and the North Side Energy Company that owns the project. Revenue received from the sale of the electrical energy is used for the refurbishment and maintenance of the 100-year-old canal system infrastructure and to fund improvements on the canal system. By using these funds, the companies are able to carry some of the financial burden associated with the delivery of irrigation water to the growers. 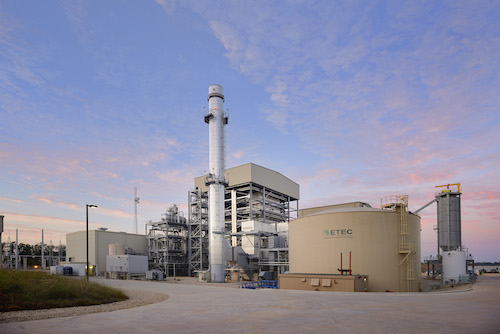 The project was delivered under budget, three months ahead of schedule and with performance levels that surpassed specifications and is one of the largest, most-efficient and sustainable plants of its type.

HLRPP features a very efficient 5-heater thermal cycle. Most plants of this type are designed with a 3-heater thermal cycle, which leads to less efficiency. The net plant heat rate is improved by use of a variable frequency drive (VFD) for the large Induced Draft (ID) Fan motor. Typically, boiler manufacturers design these large fans with significant margins on flow, static pressure and ambient conditions. The VFD reduces the speed (and therefore the energy consumption) of the ID Fan at normal conditions, realizing savings of approximately 300 kW on an annual average basis. This was particularly helpful during the plant’s first year of operation as the region experienced very heavy rainfall resulting in high moisture content of the biomass fuel.