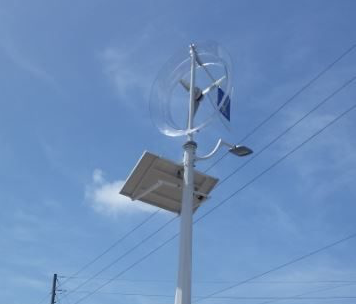 Jim Smyth, CEO of airsynergy said: “We are excited that our revolutionary, award-winning technology is making history. Our aim and mission is to provide people almost anywhere with a reliable, affordable renewable power source which, until now, has been only a dream. This first for Grenada will help make people more aware of what is possible.”

The hybrid streetlight made history following a collaborative pilot project between New York-based Aris Wind — the company licensed to sell airsynergy products in the US and the Caribbean — and local Caribbean operator Grenlec Utilities.

Gerry Ryan, CEO of Aris Wind, said: “As we sought demonstration sites, end users and partners throughout the Caribbean Islands, Grenada’s strong wind and sun resource made it a perfect place to start our Caribbean launch and we are delighted that Grenlec Utilities embraced the project.”

The streetlight is positioned at the highest traffic area on the island at an area known as the Sugar Mill Roundabout — a key intersection that opens all traffic to and from the airport and the university to the center of St George’s and the business district. “This is really the ideal location to allow people to see it and talk about it,” explained Ryan.

The off grid RPU powers an 80-watt LED bulb with inbuilt battery storage lasting up to five days.

Once the preparation work in laying the foundation was set, the RPU was installed within a few hours as a result of tilt up tower technology that sees the entire unit lifted by a crane and slotted into position.

Ryan added: “Aris will propose additional off-grid hybrid street lights for the island and, when ready, the demonstration of our new Total Energy Solution (TES) – an advanced on or off grid wind/solar power generation unit with optional water harvesting to power homes and small businesses.”

The first installation for Grenada follows the recent launch of the new hybrid renewable street light in New York.

In recent month’s airsynergy’s RPUs have been installed in a number of operating locations in New York including an athletic field and corporate headquarters in Mount Vernon, an elementary school and public housing facility in Tarrytown where 3,000 commuters see the streetlight daily and a public street in Breezy Point, which was devastated in the wake of Superstorm Sandy.

Unlike others, the wind-solar hybrid remote power unit works in many challenging urban locations to provide reliable off-grid power, suitable for lighting, water pumping and potentially other critical applications such as CCTV and cell phone charging stations.

The unit serves as a critical power service as in times of emergency and power outages its lights keep shining or it keeps producing power given it does not need to be connected to the grid and has battery storage lasting for days.

The RPU is ideal for providing reliable, independent light on roadways, walkways, parking lots and recreation areas and also for providing power for the agricultural sector.

Added design capabilities mean the streetlight can showcase company branding or be utilized for advertising which can be displayed via a renewably powered LED screen, bringing a possible additional source of revenue to end users.