Vancouver, British Columbia — In Alberta, Canada, renewable energy is not increasing energy prices for consumers as it has in other parts of the world, such as Germany. In fact, the exact opposite is true.

Alberta clears all energy through the spot market, although some PPAs are still in effect from when the province deregulated. As a result, wind and solar energy sell for discount prices.

According to Ben Thibault author of a recently released study by the Pembina Institute, the price of electricity in Alberta is 65 percent less when wind is generating more than 600 MW of electricity, compared to days when the wind isn’t blowing and production falls below 300 MW. The average price of wind energy on the energy pool during 2013, was CAN $0.055/kWh. This is 2½ cents beneath the average electricity spot price. See the chart below for all generation type average prices. 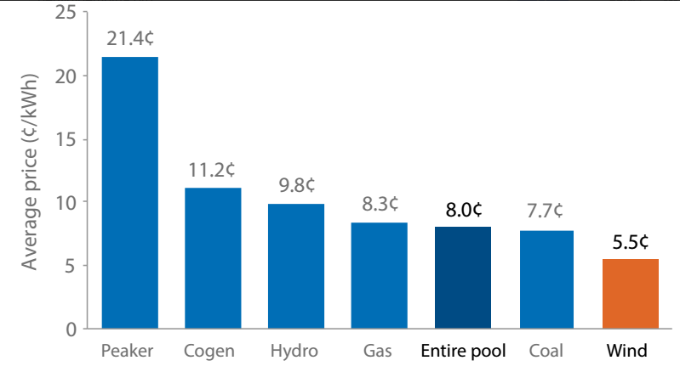 Alberta’s wind energy has been selling for less than the average price from the province’s energy market for the past two years.  It was 31 percent below average in 2013 and 41 percent below in 2012.

The only other sector with consistently low prices is coal, which makes up about 67 percent of the province’s electricity. Contrary to what many might think, intermittency can be more of a problem with coal-fired power plants than renewable energy plants. Though they are reliable 75 percent to 80 percent of the time, coal plants go down without warning and leave much bigger holes for dispatchers to plug. Nevertheless coal power plants supply cheap energy. (Alberta’s decision to close most of its coal plants by 2030 is based on health issues.)  Because of this, when the province considers adding new generation facilities, it generally considers either wind or natural gas.

The reason for low wind prices is that wind energy is not produced during peak hours and it tends to drive the pool price down.

“That is not something that generators are too enthusiastic about. It undercuts the amount of revenue they able to bring in for their energy,” said Thibault. This puts a damper on new development for renewables as project developers can’t make a profit, according to analysis by CanWEA. “Ironically, this means that when wind energy benefits Alberta consumers by bringing down power pool prices, it actually makes it less likely that wind energy projects can be built in the Alberta market,” the CanWEA analysis states.

Though low wind energy spot market prices could become less of an issue if more battery storage is adopted, in the meantime new energy project developers in the province are turning to natural gas. It may cost consumers more when natural gas fuel prices rise in coming years, but natural gas offers a more reliable energy stream and today, that translates into higher profits.

As a result of the lack of subsidies and other financing aids, Alberta’s wind sector is dominated by a handful of electric generators plus some oil and gas companies.

“It is really unfortunate, if we had decent policy in this province, we would have a lot more invested from a variety of different companies because they would be able to obtain the finances,” said Thibaut. “This would increase diversity and competition in Alberta’s energy market.”

Solar energy production is more within reach of the general population. As there are no utility scale facilities, it is produced on rooftops and through small commercial installations throughout the province. Solar PV owners get paid through net-metering in Alberta. When they produce more energy than they need, that energy is fed into Alberta grid, and their electricity meter records the amount of energy and awards them a credit against their power bill for the energy that they exported. Solar PV owners  are paid at the retail rate, which has tended to be between CAN $0.07 and $0.115 per kWh but averages out to around CAN $0.083. This price, too, is a discount because solar is produced during peak hours when the average pool price is CAN $0.13 per kWh, meaning that solar power is also lowering utility bills in Alberta. 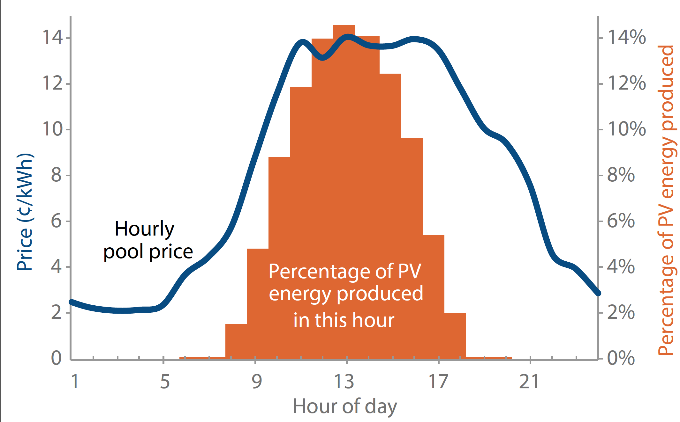