According to the International Energy Agency, sub-Saharan Africa will require more than $300 billion in investment to achieve universal electricity access by 2030.

Committing more than $7 billion in U.S. government support and attracting nearly three-times that in private sector funding, Power Africa, which launched in October 2013, marks a milestone for President Obama with regard to action on climate change and clean energy, not to mention foreign relations and international development. The initiative gives the U.S. a leadership role in addressing a range of critical regional and global issues – eradicating poverty, improving health and gender equality, opening up economic opportunity and conserving ecosystems and natural resources as well as promoting clean, renewable energy. In this regard the program dovetails nicely with the U.N.’s expiring Millennium Development Goals (MDGs) and its new strategic Sustainable Development Goals (SDGs), as well as Secretary General Ban Ki-moon’s Sustainable Energy for All initiative.

After just one year, committed Power Africa projects were predicted to provide enough electricity to power more than 5 million African homes, businesses, schools, and clinics — one-quarter of the program’s goal. Momentum continues to rise.  Last August President Obama tripled the Power Africa goal to installing an aggregate 30,000 MW of new sustainable generation capacity and expanding access to electricity to at least 60 million households and businesses across all 28 sub-Saharan African nations. In addition, he pledged the U.S. would raise monetary support for Power Africa to $300 million per year. 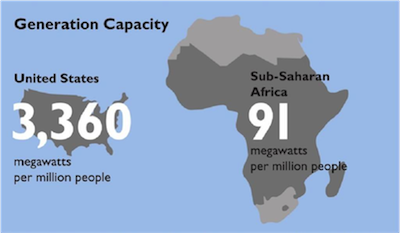 The Obama administration is “trying to implement a new model of development” in emerging-market countries, he explained, one focused on private-sector participation and capacity building. “We’re trying to break down barriers (between and within public and private sector partners in multiateral development programs) by sharing resources and filling in gaps in capacity – legal, financial, technological, operational – so as to significantly improve overall likelihood of success,” he said.

Raval cited the Ethiopia Corbetti Geothermal power project, which could produce as much as 1,000 MW of baseload electrical power, as one example of the kinds of large, utility-scale renewable energy projects Power Africa is facilitating. A partnership between the government of Ethiopia, the Ethiopian Electric Power Corporation and Reykjavik Geothermal, Corbetti Geothermal is “the first fully privatized project of its kind in Ethiopia,” he pointed out.

In renewing the U.S. commitment and expanding Power Africa President Obama also announced $6 billion in new private-sector commitments. In addition to other Power Africa initiatives, these facilitated the launch of the $2 million Beyond the Grid sub-program, the overarching goal of which is to foster “private investment in off-grid and small-scale energy solutions that seek to expand access to remote areas across sub-Saharan Africa.” Forty private-sector companies are participating in Beyond the Grid including Silicon Valley high-tech leaders such as Vinod Khosla.

The U.S. African Development Foundation (USADF), with additional capital from GE Africa and USAID, funded 28 projects in the first two Off-Grid Energy Challenge funding rounds and is in the process of finalizing a third round, according to Tom Coogan, regional program director responsible for Power Africa.  “We want to do a number of things: fund innovative solutions, demonstrate successful business models, and showcase technologies that can be scalable, expanded and replicated,” Coogan said. (Image credit: BBOXX) 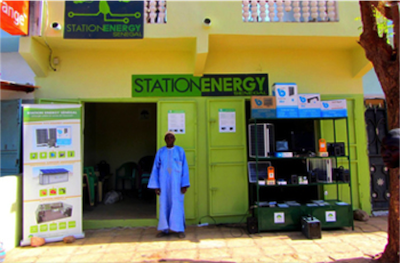 Pay-as-you-go solar, microgrid access and smart metering figured prominently in the $100,000 grants USADF has provided thus far to African-owned and operated businesses, Coogan said. And USADF is looking at doing more, he added.

Solar PV makes up about two-thirds of the small-scale, distributed renewable energy projects USADF has funded. Most of these also include battery storage, Coogan noted. In addition, U.S. venture capital groups provided some $38 million in funding for solar companies focused on distributed PV products in Africa and other emerging markets in 2015’s first quarter, according to Mercom Capital’s latest quarterly solar finance and M&A report.

Deals in the report include:

Having moved successfully through trial and proof-of-concept phases, “we’ve been inundated with real inquiries over the last three months,” Tipple said.  The problems South Africa state utility Eskom is having meeting electricity demand in South Africa exist to an even greater degree in countries across the sub-Saharan region. “We’re seeing real interest across all vertical market sectors, from residential on through to telecoms, mining companies and utilities,” he said.

Intelligent energy storage and distribution platforms can be used to efficiently and cost-effectively meet three or four different needs, Tipple pointed out.  Take all of them into consideration and “you’re seeing ROIs (returns on investment) within five years,” he explained. Factor in lost production at mines in the region and energy storage ROIs in the sector can come in at under three years, he added.

All told, rapidly falling costs, technological advances, innovations in and greater access to financial resources and energy policy reforms are fueling strong interest in intelligent energy storage and renewable energy microgrids throughout sub-Saharan Africa. That testifies to the increasing success the Power Africa initiative is having in promoting clean, sustainable energy access across a region in desperate need of it.