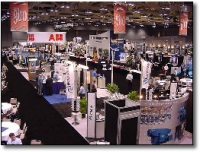 IIR Exhibitions, a division of the Institute for International Research, cancelled the 2003 Sustainable Energy Expo & Conference (SEEC) scheduled for October 1-3 in Los Angeles. Instead, IIR decided to lend its full support to the PennWell Corporation’s Power-Gen Renewable Energy Conference and Exhibition. The two groups will unite their efforts for the trade show and conference scheduled for March 1-3 in Las Vegas, Nevada in 2004.

Tulsa, Oklahoma and New York, New York, July 16, 2003 [SolarAccess.com] “We are delighted that IIR is putting their support behind Power-Gen Renewable Energy and pleased to see all energies coming together for one great successful all-renewables trade show,” said Michael Eckhart, Chairman of the American Council for Renewable Energy. “This move reflects the momentum that continues to build in our industry, and displays the strength created by unifying the multiple technologies under the renewable energy umbrella.” Eckhart added that the upcoming Power-Gen event is a complement to the individual renewable energy technology conferences that are the cornerstones to the industry’s technology based programs. IRR said it would be beneficial to the international renewable energy industry to change their plans and combine forces with Power-Gen, because 2003 has proven to be a tumultuous economic and political year. Due to unprecedented global market conditions, IRR indicated the move would help the industry refocus its resources in 2003. “While the industry is excited about the prospect of an event which encompasses all forms of renewable energy, it has become increasingly evident that for these customers, taking care of their own businesses in 2003 is a priority,” said Jessica J. Lawton, Conference Director for IIR Exhibitions. “The SEEC recognizes PennWell’s reputation for producing valuable energy events and with Power-Gen Renewable Energy, views this as a prime opportunity for our constituents to have the most successful event in 2004.” In partnership with the American Council for Renewable Energy (AMCRE), Power-Gen Renewable Energy will bring together the renewable energy (wind, solar, hydro power, geothermal energy, ocean/tidal, and biomass), renewable fuels (biofuels, ethanol, methanol, and biodiesel), and emerging energy technology (hydrogen systems, fuel cells, microturbines and energy storage) sectors of the energy industry to discuss the key technical, regulatory, structural, economic and market issues impacting their commercial future. The event will host a comprehensive conference program featuring multiple tracks of conference sessions, plus an all-renewables exhibition showcasing the latest products and services affecting customers in the renewable energy market. “This backing, in combination with the partnership of the American Council for Renewable Energy (AMCRE) and its members,” said Richard Baker, Group Publisher of PennWell’s Power Generation Division , “positions Power-Gen Renewable Energy to become the world’s premier renewable energy event and the only industry event of its kind.”