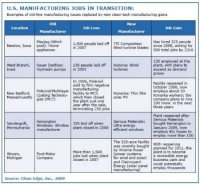 The recent deal to revamp an idle Ford assembly plant for thin-film solar PV manufacturing is one of several examples of clean-tech companies benefitting from the recession and opening factories in hard-hit regions.

October 22, 2009 – In Michigan, a 320-acre Ford Motor Co. plant sits idle after 52 years of assembling Lincoln Continentals, Ford Thunderbirds and other vehicles. It’s one of a series of US assemblies that have closed or shrunk, with more than 435,000 automotive-manufacturing jobs disappearing since the beginning of the decade, according to a Congressional Research Service report released in August.

But behind some of the buildings’ walls, a group of renewable-energy companies are working to transform the defunct assembly into a manufacturing park for equipment such as thin-film solar panels and energy-storage and power-management systems for solar- and wind-power systems. Xtreme Power, which makes the energy-storage and power-management systems, and Clairvoyant Energy, which develops thin-film solar production capacity using equipment from Oerlikon Solar, have agreed to buy the space from Ford — with the help of about $100 million in tax credits and funding from other government sources.

The assembly plant turns out to be ideal for thin-film manufacturing. For one thing, it’s in a very convenient location near road, rail and numerous suppliers of key materials, such as glass, said Chris O’Brien, head of North American market development for Oerlikon. “One of the most important materials to a PV module is glass. A number of glass suppliers in the area who have historically been suppliers to the auto industry currently have excess capacity, so there are natural synergies there.” The structure of the building also is well-suited to house thin-film manufacturing machinery, he added. “The plant is idle, available, in a region that has a skilled labor force that’s experienced in manufacturing and [has] some terrific [research and development] facilities nearby.”

The project has been cited as a poignant example of an attempt to replace some of the country’s thousands of lost automobile-manufacturing jobs with green jobs. It’s also one of the latest pieces of news highlighting the ability of some renewable-energy companies to benefit from the recession — and especially from the auto industry’s pain.

In a just-released report, research firm Clean Edge lists the project as one of several examples of clean-tech companies opening factories in towns that have experienced plant closures in the last few years. In Newton, Iowa, for example, 1,800 employees lost their jobs in 2006, when Whirlpool bought home-appliance maker Maytag Corp. and closed its offices and plants in the city. Wind-turbine-blade maker TPI Composites, which last year opened a factory in Newton, Iowa, already employs 325 people there today and hopes to expand to 500 employees by 2010. Setting up shop in those areas gives companies access to skilled workers who need minimal retraining, according to the report. [Editor’s note: for more on Clean Tech Job Trends 2009, check out In Focus: Clean Edge Says Clean Tech Jobs are Everywhere.]

Other examples from the report include thin-film solar company Konarka, which last year opened a manufacturing facility in New Bedford, Mass., at the site of a Polaroid factory that closed in 2007; and green-building materials company Serious Materials, which this year bought and reopened a Kensington Windows factory that had closed last year. (See chart, below.)

Buying assets on the cheap

The principal of buying assets when they’re cheap is hardly a new idea, and renewable energy is no exception. Valero Renewable Fuels bought a group of ethanol factories from bankrupt VeraSun Energy Corp. back in April, paying only about 25 percent of the estimated cost of building those factories from scratch. Solar and other clean-tech companies are hoping to do the same thing: take advantage of the low prices available today to expand their manufacturing capacity cheaply and to position themselves to grow when market conditions improve.

It’s not just the big companies either. Sure, German solar company SolarWorld offered to buy Opel facilities from General Motors Corp., later dropping its bid. But in some ways, the recession has been a boon to startups that might have otherwise had difficulty raising the capital to buy manufacturing equipment, or persuading manufacturing partners to buy the equipment, especially if they plan to start small.

Take concentrating-photovoltaic startup Skyline Solar, which plans to have its systems made in metal shops that make parts for the automobile industry. Tim Keating, vice president of marketing for the company said the company expects to make “multiple megawatts” of its systems on those automobile lines starting at the end of this year.

And SunModular, a startup developing a component to help keep crystalline-silicon panels cool — which it claims can boost a system’s electricity output by between 5 and 10 percent — also plans to use the extra capacity at automotive-supply factories to keep its manufacturing expenses low.

Aside from the manufacturing capacity, the hard times for the auto industry also means good deals for capital equipment, including machines for plastic molding and sheet metal fabrication, CEO Eugenia Corrales said. “There are a lot of large capacities available and we can leverage [them],” she said, adding that the automotive downturn has been “a good thing for us.” “We’re not having to convince suppliers to buy big new pieces of equipment. They already have it.”

Meanwhile, other companies are finding ways to make use of automotive technology for renewable energy. Artemis Intelligent Power in September scored a £1 million grant from the UK government to convert its hydraulic pump and motor technology, currently used in automotive applications, to make wind-turbine transmission systems.

Of course, it also makes sense for companies going after government funding — especially in the United States — to underline a connection to auto-industry suffering. One of the goals of the stimulus has been to replace lost jobs with new green jobs, and the automotive industry has suffered more than most others. Some companies aiming for stimulus funding have been currying favor with government agencies by planning US manufacturing plants or locating projects — complete with green jobs — in Detroit. “There is no way to avoid the political context in which all this has happened,” said Harrison Wellford, founder and managing director for consulting firm Terrawell Energy. Building projects in regions that are hurting the most, such as in Michigan, helps, he added.

The connection between solar energy and cars may be growing in other ways too. Toyota launched a solar-paneled Prius for its 2010 model. Fisker Automotive, which scored a $529 million loan from the US Department of Energy last month, has designed its Karma sports car with a solar roof. And SolarCity in September announced it had built a solar-powered electric-car-charging corridor between Los Angeles and San Francisco in California.

While SolarCity chief executive Lyndon Rive said he wouldn’t call the small — but growing — market for electric vehicles a driver for solar power, he certainly would like electric-vehicle owners to install solar panels on their homes and businesses. “The focus is adding all the ingredients to live a carbon-free lifestyle,” he said. “If every car was an [electric vehicle], it would help the problem, but not solve it. You need [electric vehicles] combined with solar to start making a difference.”

This article was originally published by RenewableEnergyWorld.com and was reprinted with permission.