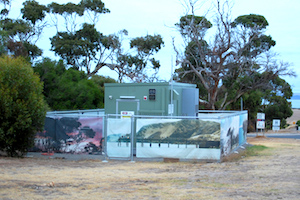 A cutting edge energy storage system to support a town with wildly fluctuating electricity needs has been switched on in South Australia.

The autonomous system in the fishing village of Cape Jervis is part of a $3.65 million trial, which could lead to town batteries being installed in other remote communities to stabilize electricity supply and provide backup power during blackouts.

The system centers on a 270-kWh lithium-ion battery that receives control signals from the nearby high-voltage electricity line and links with the town’s supply.

The Internet-of-Things-capable control system reduces peak load of the local substation, stabilizes the electricity network in the area and supports a number of nearby customers in the event of a power interruption.

Connected parallel to the grid, the battery is charged by excess power generated by the town’s rooftop solar PV systems or the grid, depending on availability. The stored electricity is then released at times of peak demand or when grid power is not available, such as during a blackout.

The mobile battery is also capable of being connected to wind farms, solar arrays or diesel generators.

Cape Jervis is a small town with a population of about 300 people at the tip of the Fleurieu Peninsula about 100 km south of the South Australian capital Adelaide.

However, the town’s population grows dramatically during the summer holiday season.

Cape Jervis also has a high proportion of rooftop PV solar, which adds volatility to the grid because of large variances in weather conditions and electricity supply and demand throughout the year.

The project is a collaboration between the University of Adelaide, SA Power Networks and system supplier PowerTec. It is supported by the Australian Renewable Energy Agency (ARENA) on behalf of the Australian Government with $1.44 million in grant funding.

Associate Professor Nesimi Ertugrul, from the University of Adelaide’s School of Electrical and Electronic Engineering, said the volatility created by too much solar energy being pushed to the grid in times of low demand or during times of high peak demand and low solar generation destabilized the system, particularly in remote sections of the grid.

He said the trial would provide insights into the system under real operating and weather conditions, creating a knowledge base for industry and system developers.

“This technology is novel because the mobile battery energy storage system’s operations are now completely autonomous,” Associate Ertugrul said. “We can monitor the system and intervene if necessary, but the system can operate safely in all kinds of situations without the need for any operator instructions.”

Ertugrul noted that, if an outage occurs, the mobile battery system automatically runs a range of safety checks before providing back-up power to nearby houses until the main grid is restored.

“This feature means that residents can also share residential solar power with neighbors during an outage,” he said.

Ertugrul said the system could be used to improve a number of situations including power quality issues, providing temporary peak power sources, tariff arbitrage or as a virtual power plant.

He said it could prove to be an ideal solution for electricity network providers that needed to increase supply to a remote section of the grid without increasing line capacity.

“Batteries are costly — either each house can have a battery system at a cost of about $10,000 or you can combine all those activities in a regional sense to make a community,” he said.

“This is more economical and more manageable because an individual household battery cannot regulate voltage beyond a very limited level.

“The cost of our system is currently expensive because it is a measurement and research platform but long-term it can be built at very low cost. If that cost is much lower than a second transmission line or increasing the capacity of the transmission line then they may choose to go that way.”

SA Power Networks Corporate Affairs Manager Paul Roberts said Cape Jervis had been chosen because of the high level of solar PV generation in the area and the large influx of people in the summer, which, when combined with very hot weather, resulted in high peak electricity demands on a few days a year.

“From SA Power Networks’ perspective, the trial is an opportunity to look at alternative ways to meet peak demand requirements, rather than more expensive investment in increased network capacity,” he said.

“We are keen to understand the benefits, reliability and cost of this kind of battery installation as an alternative option to direct investment in a network capacity upgrade.”

South Australia is a global leader in renewable energy. It leads the nation in the uptake of wind energy and rooftop solar with renewable sources accounting for almost 50 percent of the electricity generated in the state.

The data generated from the Cape Jervis trials and all tests using the mobile test platform will be made publicly available on the Australian Energy Storage Knowledge Bank.

This article was originally published by The Lead, South Australia here under a Creative Commons license.