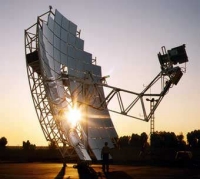 San Francisco, California [RenewableEnergyAccess.com] A solar project of unprecedented size moved an important step closer this week to being built. This week the California Public Utilities Commission (PUC) approved a contract for the initial deployment of 500 MW of concentrating solar power (CSP), with expansion options up to 850 MW.

This is the latest move toward a rebirth of CPS technologies in the U.S. and would be the first commercial application of the unique solar dish technology that has been perfected by Arizona-based Stirling Energy Systems. The Stirling dish technology converts thermal energy to electricity by using a mirror array to focus the sun’s rays on the receiver end of a Stirling engine. The internal side of the receiver then heats hydrogen gas, which expands. The pressure created by the expanding gas drives a piston, crankshaft, and drive shaft assembly much like those found in internal combustion engines but without igniting the gas. The drive shaft turns a small electricity generator. The entire energy conversion process takes place within a canister the size of an oil barrel. The process requires no water and the engine is emission-free. Tests conducted by the Sandia National Laboratories have shown that the Stirling dish technology is almost twice as efficient as other solar technologies. These include parabolic troughs that use the sun’s heat to create steam that drives turbines similar to those found in conventional power plants, and photovoltaic cells that rely on an expensive and increasingly limited raw material stock. The utility involved is Southern California Edison. With an estimated capacity factor of 29.3 percent, the initial 500 MW are expected to generate around 1,047 MWh of energy per year, and the expansion would generate 1,780 MWh per year. The energy acquired from this contract will count toward Edison’s Renewable Portfolio Standard (RPS) requirements. This electrical output represents from approximately 1.4 percent to 2.6 percent of Edison’s annual sales, excluding direct access sales, recorded for 2004. The RPS Program, created by Senate Bill 1078, requires each utility to increase the amount of renewable energy in its portfolio to 20 percent by 2017, increasing by a minimum of one percent per year. The state’s Energy Action Plan accelerates that goal to 2010 to, among other things, more quickly reduce the state’s greenhouse gas emissions, moderate increasing dependence on natural gas, and mitigate the associated risks of electricity price volatility. The initial phase online date is January 2009 with a completion date for the initial size in December 2012.