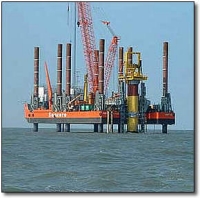 As hundreds of delegates gathered in Aberdeen for one of the UK’s largest renewables events, the British Wind Energy Association (BWEA) released new data showing that the UK wind industry is on course to deliver a record year of new generating capacity in 2004.

London, England – May 27, 2004 [SolarAccess.com] A review of projects due to go online this year shows that four projects totaling 68.3 megawatts (MW) have already gone live and construction is underway on a further eight. As a result a minimum of twelve new wind energy installations representing 325 MW are confirmed for commissioning in 2004. The BWEA review concludes that this figure could well increase to just under 350 MW by the end of the year as more scheduled projects start construction. Construction is also scheduled to start this year on a minimum of 300 new megawatts for completion in 2005. By comparison last year the industry installed just over 100 MW and during the past decade has installed an average of just 50 MW a year(2). BWEA also released interim data on planning consents achieved to date in 2004. Again these are positive and show that already 263.3 MW of new planning consents have been obtained in the first five months of the year. Of the 17 projects where decisions have been made in 2004, some 85% of capacity has been approved with 13 securing the necessary planning consents. When combined with consents obtained over previous years this means that there are now 981.6 MW of onshore projects with consents awaiting construction, excluding those earmarked for completion in 2004. Progress is also being made offshore in the UK’s first phase of development at sea, ‘Round One’. BWEA can confirm that by the end of 2004, Scroby Sands off the coast of Great Yarmouth, the second of the UK’s large-scale offshore projects, will be fully operational. As of today, 25 turbines have been installed and all 30 are due to be in place before the end of the month. Projections for offshore in 2005 are also positive with confirmations that at least a further three Round One projects, at Barrow, Gunfleet Sands, and Kentish Flats, with a combined capacity of almost 300 MW should be built and fully operational by the end of 2005. “These figures are really exciting and encouraging and confirm that the UK wind industry has at long last come of age,” said Marcus Rand, Chief Executive of BWEA. “There is no doubt that our industry both onshore and offshore is getting its boots on and starting to deliver the build rates that should offer confidence that our national renewable targets are within reach. The new information on planning consents is also positive news and shows that the majority of projects are being supported at the local and regional level.”