This is going to be an exciting winter. Two different revolutionary green energy solutions are about to take giant steps. After 60 years of dangerous nuclear power based on bomb technology, we may finally see nuclear energy that is clean, safe and cheap as dirt. If we could achieve 100% efficiency, E=MC
² tells us that one ounce of matter could be converted to seventy million dollars worth of electricity!

But today’s nuclear plants use only a f
raction of a percent
of the energy in the fuel. The rest remains as dangerous radioactive waste. The neutrons produced create dangerous waste and heat, which must then be converted to electricity. About 80% of the cost of existing nuclear plants is for the steam plant that converts about 1/3 of the heat to electricity and disposes of the other 2/3
as waste heat to a nearby body of water.


Finally, several private
companies
have broken away from the military-industrial domination of government supported energy research to develop inherently-safe, nuclear reactions that produce electricity directly and produce no neutrons. Tri-Alpha raised $50 million from investors like Paul Allen and Goldman Sachs. They are currently in stealth mode, developing a device that will fire two balls of lightning (plasmoids) into each other to fuse Boron and hydrogen. Boron is cheap, safe and plentiful. If all of the world’s power was generated from boron, it would only use 10% of our current production. Boron fusion produces only safe, non-radioactive helium as a product.

The big problem with Boron is that it requires a temperature of about a billion degrees to fuse. Most fusion research has tried to use hydrogen isotopes that fuse at a much cooler 100 million degrees. Though a billion degrees sounds like an impossible goal, there are natural processes that routinely achieve high temperatures for nanoseconds in tiny micron-sized areas. A very simple device called a dense plasma focus (DPF) can launch a ball of electrical plasma which then shrinks to an infinitesimal point. As the ball shrinks, its energy becomes concentrated in a smaller and smaller volume making the temperature rise incredibly. Power density increases of ten thousand trillion are possible.

The loud pop when you crack a bullwhip uses the same principle: as the pressure wave travels down the whip to smaller and smaller diameters it travels faster and faster, ultimately it exceeds the speed of sound and makes a loud sonic boom. Cavitation bubbles in a liquid similarly concentrate energy as they collapse, often melting pits into the metal on impeller blades. They can even cause fusion flashes of light.

After 55 years of hard work, the US fusion program is still not scheduled to produce any useful power until 2030. Perhaps it’s because they have been fighting nature by trying to stabilize large hot plasmas. Nature doesn’t cooperate. A smarter way is to
let the plasma go and harness its natural, unstable collapse
.

The plasma created by a simple DPF device creates its own swirling magnetic field as it collapses. This field produces a
focused stream
of electrons out one side and a positive ions out the other. These beams are perfect for generating electrical power directly with a simple transformer coil and photoelectric cell. The billion degree temperature lasts for only nanoseconds and is confined to a micron-sized spot far from the walls of the device. Things are easier when we don’t try to fight nature but instead learn to follow it. “Go with the flow” is a good motto. 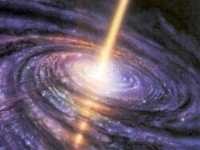 Plasmoids are everywhere in the universe and have been accurately modeled by computers and found to scale perfectly from tiny ball lightning (which you can easily demonstrate in your home
microwave
) to entire galaxies and quasars. Quasars are the most energetic objects in the universe. Focused jets of energy, similar to those produced by DPFs, are seen on astronomical photographs. By copying nature instead of fighting it, we can get the energy we need, easily.


This winter a small, privately financed, company in New Jersey called Lawrenceville Plasma Physics (LPP) will attempt Boron fusion for the very first time. They have been testing and tweaking their DPF device using deuterium as a fusion fuel. Already their SUV-sized machine has produced
3.7 million neutrons
per Joule of input energy. Correcting for fuel, this is 60 times better than the $3 billion National Ignition Facility which uses 192 lasers mounted on a stadium-sized dome.

LPP has spent only $3 million so far. They first achieved billion degree temperatures in 2001 under a NASA/JPL contract. Unfortunately, that was the year that NASA was ordered to get out of the fusion business- An apparent turf battle that set back the development at least a decade. Fortunately, small private investors have kept LPP alive. Finally, their test machine is reaching temperatures needed for the boron reaction. This fall they plan to alter their test setup to use boron (pB11) fusion. If it works, it could be the first hot fusion reaction ever to achieve break-even, a very exciting breakthrough and a victory for the little guys who almost got trampled by the “big science” nuclear establishment.


The LPP test machine’s DPF is scaled to have a capacity of 5 megawatts of electrical power. This is an excellent size for transportation: Ships, airplanes and trains could carry their own power plant with almost unlimited range and insignificant fuel costs. Distributed power generation at the substation level could eliminate the need for the massive power grid expansion needed for today’s Gigawatt approach. Of course, much work will be required to refine this design into a real mass-produced product. But once a production line is running, the economic advantage of boron fusion could quickly replace coal and fossil fuel power.

Eric Lerner
, the founder of LPP wrote a
book
in 1992 about plasma cosmology. In 1970 Hannes Alfven won the Nobel prize for these ideas, but big science has virtually ignored them. Plasmoids seem to be a key phenomenon in nature and some have even suggested that virtually all matter consists of them. They do scale all the way from the universal to the atomic level.

For sixty years scientists have been trying to tame fusion as a power source. Tens of billions of dollars have been spent on the task without generating a single watt of net power. But next year I predict the logjam will break because creative people working outside of the groupthink of big science will show the way

In October, Andre Rossi has promised to deliver its first commercial
megawatt
thermal plant to Ampenergo, a spinoff of Leonardo Technologies Inc, that will market the E-Cat. Daily updates on the Rossi
blog
claim that everything is built and on track for delivery as scheduled. Using nano-powdered nickel and hydrogen fuel, his approach to generating heat is amazingly simple. Let’s hope that he ships and let’s hope that LPPs boron fusion test works. We badly need them both!