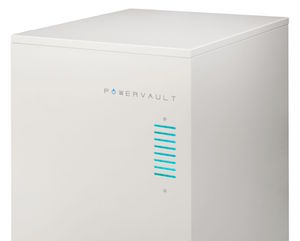 A U.K. energy-storage startup is aiming to take on Tesla Inc. in the competition to outfit homes with affordable backup battery power.

Powervault Ltd. is preparing to boost production of its lead- and lithium-ion batteries, said Managing Director Joe Warren. The London-based company is targeting sales of 50,000 units a year by 2020, up from about 1,000 this year, he said.

“We have a huge market to go after in the U.K.,” said Warren, a data center operator turned battery-maker who’s entering the home storage market just as billionaire Elon Musk switches on Tesla’s U.S. Gigafactory. Musk expects the plant will double the global production of lithium-ion batteries next year.

Energy storage is an essential link needed to make intermittent solar and wind energy reliable. Batteries installed inside homes can store excess energy produced by panels or windmills during peak hours of operation. When combined with smart meters and digital technologies, batteries can help utilities regulate the grid by providing power reserves which can be tapped and transmitted on demand.

“The key market right now is people with solar on their rooftops,” Warren said. “The smart meter roll-out will make people much more aware of their energy consumption. We’re expecting people to take a much more active stance.”

There were about 900,000 solar systems on British rooftops at the end of 2016, according to Bloomberg New Energy Finance. The U.K. is also rolling out smart meters to 53 million houses and small businesses by 2020 to improve understanding of energy usage.

Founded in 2012 with money from the U.K. government and private investors, Powervault has aggressively tried to bring down the cost of batteries in order to make them affordable to more homes.

A Powervault lead battery that can store 3 kWh of power sells for 2,500 pounds ($3,117) a unit, or, about $1,039 for each kWh of electricity stored. That price is about 12 percent cheaper than the $1,175/kWh average price in the industry, according to Bloomberg New Energy Finance. Tesla’s Powerwall 2 lithium-ion battery sells for $393/kWh, though its 14 kWh size still makes it a more expensive option for consumers.

“At the moment, paybacks for solar PV and home storage are too long for most customers,” said Logan Goldie-Scot, an analyst at BNEF in London. “We expect this to change though.”

Warren said he anticipates prices for Powervault’s batteries, which can cover about half an average British home’s daily power consumption, will be even cheaper going forward. The company’s planning to give used electric automobile batteries a second life by hooking them up to homes, he said.

Even without solar panels, affordable batteries could save consumers money by storing inexpensive power from the grid during times of low demand and feeding stored power into their home appliances during expensive peak hours at night.

Powervault is planning to expand internationally in the next few years with an initial focus on Europe, according to Warren, who said some units have already been sold in Spain.

“We’ve been very careful to design them to be universally compatible,” he said. “We want them to be easy to install and use everywhere in the world.”