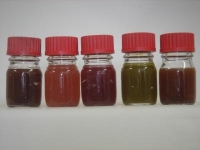 Purple bacteria were among the first life forms on Earth. They are single celled microscopic organisms that play a vital role in sustaining the tree of life. This tiny organism lives in aquatic environments like the bottom of lakes and the colorful corals under the sea, using sunlight as their source of energy. Its natural design seems the best structural solution for harvesting solar energy. Neil Johnson, a physicist and head of the inter-disciplinary research group in complexity in the College of Arts and Sciences at the University of Miami, thinks its cellular arrangement could be adapted for use in solar panels and other energy conversion devices to offer a more efficient way to garner energy from the sun.

“These bacteria have been around for billions of years, you would think they are really simple organisms and that everything is understood about them. However, purple bacteria were recently found to adopt different cell designs depending on light intensity,” says Johnson. “Our study develops a mathematical model to describe the designs it adopts and why, which could help direct design of future photoelectric devices.”

Johnson and his collaborators from the Universidad de los Andes in Colombia share their findings in a study entitled “Light-harvesting in bacteria exploits a critical interplay between transport and trapping dynamics,” published in the current edition of Physical Review Letters.

Solar energy arrives at the cell in “drops” of light called photons, which are captured by the light-gathering mechanism of bacteria present within a special structure called the photosynthetic membrane. Inside this membrane, light energy is converted into chemical energy to power all the functions of the cell. The photosynthetic apparatus has two light harvesting complexes. The first captures the photons and funnels them to the second, called the reaction center (RC), where the solar energy is converted to chemical energy. When the light reaches the RCs, they close for the time it takes the energy to be converted.

According to the study, purple bacteria adapt to different light intensities by changing the arrangement of the light harvesting mechanism, but not in the way one would think by intuition.

“One might assume that the more light the cell receives, the more open reaction centers it has,” says Johnson. “However, that is not always the case, because with each new generation, purple bacteria create a design that balances the need to maximize the number of photons trapped and converted to chemical energy, and the need to protect the cell from an oversupply of energy that could damage it.”

To explain this phenomenon, Johnson uses an analogy comparing it to what happens in a typical supermarket, where the shoppers represent the photons, and the cashiers represent the reaction centers.

“Imagine a really busy day at the supermarket, if the reaction center is busy it’s like the cashier is busy, somebody is doing the bagging,” Johnson says. “The shopper wonders around to find an open checkout and some of the shoppers may get fed up and leave…The bacteria are like a very responsible supermarket,” he says. “They would rather lose some shoppers than have congestion on the way out, but it is still getting enough profit for it to survive.”

The study develops the first analytical model that explains this observation and predicts the “critical light intensity,” below which the cell enhances the creation of RCs. That is the point of highest efficiency for the cell, because it contains the greatest number and best location of opened RCs, and the least amount of energy loss.

Because these bacteria grow and repair themselves, the researchers hope this discovery can contribute to the work of scientists attempting to coat electronic devices with especially adapted photosynthetic bacteria, whose energy output could become part of the conventional electrical circuit, and guide the development of solar panels that can adapt to different light intensities.

Currently, the researchers are using their mathematical model and the help of supercomputers, to try to find a photosynthetic design even better than the one they found in purple bacteria, although outsmarting nature is proving to be a difficult task.

Marie Guma-Diaz is a science writer for The University of Miami.