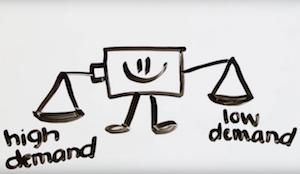 America’s power grid is a complex network of power plants and transformers connected by more than 450,000 miles of transmission lines. As a major clean energy contributor, U.S. hydropower plays an important role today for both electricity generation and energy storage. For more than 100 years, U.S. hydropower has been an important source of low-cost, low-emissions renewable energy.

Hydropower operators can quickly ramp up or down and can rapidly respond to fluctuations in the demand for electricity through a technology called pumped-storage hydropower (PSH), giving utilities a cost-effective way to help incorporate more variable generators such as wind and solar energy into the power grid. Often described as “giant batteries,” PSH is the dominant form of energy storage on the electric grid today and is currently the most affordable form of bulk energy storage available. PSH works by pumping water into higher elevation reservoirs at times when there is a surplus of electricity and then releasing that water into lower elevation reservoirs to generate electricity when needed.

According to the Hydropower Vision report, the U.S. has significant potential for developing new PSH resources. With an opportunity for an additional 36 GW of PSH capacity, new projects could more than double the current U.S. installed PSH capacity of 21.6 GW. 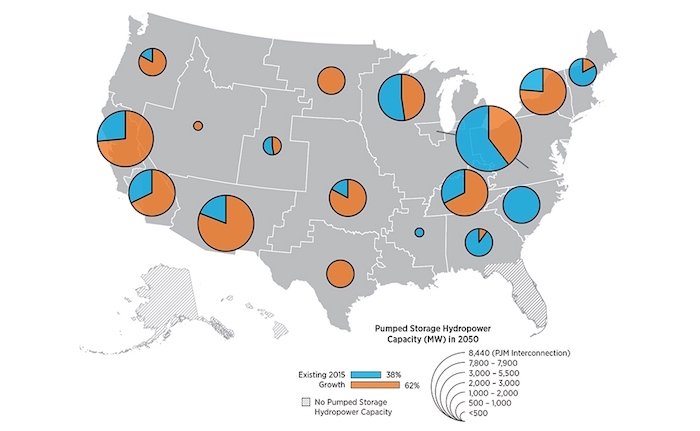 The value and contribution of renewable electricity generation, including hydropower, wind, and solar, continues to grow. These clean energy technologies not only reduce the carbon pollution that causes climate change, but they also support a domestic energy economy with U.S. manufacturing and U.S. jobs. Engineers are developing new advanced PSH technologies with improved capabilities such as adjustable speeds, closed-loop systems (projects that are not continuously connected to a naturally flowing water feature) and modular designs—which can be more easily deployed in various locations and tailored to projects of different sizes. These enhancements allow PSH to provide grid reliability and facilitate more wind and solar by allowing grid operators to rapidly respond to variations in the amount of electricity that their mix of generators is supplying at any given time.

PSH is a proven, low-risk technology with a track record of high efficiency. According to Hydropower Vision, PSH is more flexible (by providing energy balancing needs), has longer facility lifetimes, and has lower operating costs than other technologies that can provide similar services to integrate variable generation resources onto the grid.

In this way, pumped-storage projects can help realize untapped renewable resource potential in America and represent an important part of our nation’s clean energy future.