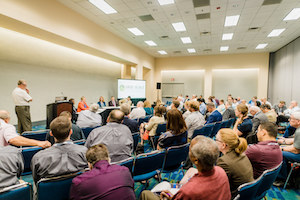 Rouselle said his company, which develops pumped storage power plants, decided to approach the market differently than most hydropower developers, who are often stymied by what they perceive as a lack of market opportunities for the technology.

“We approached the business by asking a different question. ‘When could you do it? Under what geologic circumstances is it possible?’” he said.

His business set out to follow the money and he found an answer in the form of corporates and other entities committed to clean energy.

Rouselle cited a National Renewable Energy Laboratory study that indicated that customers are willing to pay a 1.837-cent premium for renewable energy and went straight to those customers, which include corporations like Anheuser Busch and cities such as Philadelphia, which have committed to using renewable energy.

Since wind and solar power depend on the sun shining and the wind blowing, one way to deliver 100 percent renewable energy to a customer is by pairing that energy with pumped hydropower storage.

Rouselle said that with assistance from power flow software, his company set out to acquire renewables in congested areas and figure out where to site pumped storage near them to help alleviate that congestion.

“Our business model is to aggregate renewables and firm them and deliver [that energy] to those customers through a PPA,” he explained.

“It won’t work everywhere,” he cautioned but there are lots of cases in which it will work.

Renewable Energy Aggregators is currently building two 500-MW pumped storage hydropower plants in Pennsylvania and FERC recently determined that the plants will not need a license from the government organization to operate.

According to a recent press release, the facilities will exclusively use renewable energy to pump ground water from abandoned and flooded coalmines. FERC was able to issue a favorable order because REA’s design uses no surface or otherwise navigable waters.

The company has additional pumped-storage projects in development to which the FERC orders may also apply.

“We deliver renewable energy to customers that want to write a check and the selected technology happens to be pumped storage hydro,” he said.