Back in the 1980s, before the variable New Energies – most notably wind and solar – commonly sent the electricity they generate to the grid, they were labeled “intermittent” and the perception developed that they are undependable because “the sun doesn’t always shine and the wind doesn’t always blow.” That is about as relevant a way to think about solar and wind today as is Madonna’s cone bra a way to think about today’s women’s lingerie.

Anybody who says wind and sun will not be substantial sources of power generation until there is adequate and economic storage for them is either uninformed or an adversary. The proof is what is happening with wind in Denmark, in Spain, in Iowa and in Texas.

A recent study from the U.S. Department of Energy (DOE) National Renewable Energy Laboratory (NREL) found that by 2017 the U.S. grid will be ready to utilize enough wind power to generate 30% of its electricity, along with enough solar energy to meet another 5% of the demand on it – WITHOUT any storage. In fact, the study found that under current circumstances no large scale storage – even pumped hydro storage (PHS), the most cost effective right now – would be economically advantageous. (See OVER A THIRD OF POWER FROM NEW ENERGY – STUDY)

Spain’s New Energy installed capacity grew astonishingly fast in the 2005-to-2008 boom period. Its generation potential is so big that, when all factors are favorable, it tests the limits of what a system can do with New Energy and raises anew the question of storage. Even the NREL study suggests that the over-50%-levels of New Energy Spain is consuming might benefit from storage that is economically viable. Which is why – as detailed in Wind-Hydro Integration: Pumped Storage to Support Wind by Iberdrola engineers Fernando Perán Montero and Juan J. Pérez, Iberdrola – Spain’s biggest wind developer and one of the biggest in the world – has already built hundreds of megawatts of pumped storage and is committed to building thousands more. ::continue:: 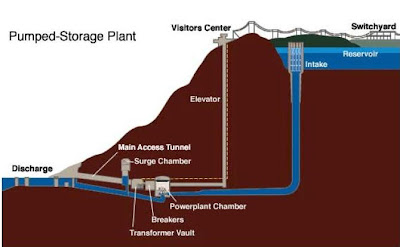 For pumped hydro storage, water is pumped uphill using excess electricity at low, off-peak prices. It is held in a reservoir. When there is an increase in energy demand, the water is released to flow downhill. The energy of the flowing water is recaptured to generate high-price, peak-demand electricity with a traditional hydroelectric mechanism that puts turbines into the water’s flow.

According to the report, Iberdrola’s experience with its 635-megawatt La Muela pumped-storage plant in Spain has proven that, second to naturally occurring hydroelectric resources of which there are few remaining development opportunities, pumped storage is the most cost effective way to “firm” wind’s variability. Iberdrola is now building an 852-megawatt La Muela 2 facility in Spain and, by 2018, will have 1,750 megawatts of electricity storage in Spain and Portugal.

Interesting aside: At levels of New Energy up to 35%, the NREL report found grid operators only had to (1) expand the region from which they draw wind and solar power, (2) make power purchases more frequently than every hour, (3) utilize advanced forecasting capabilities, and (4) increase the use of demand response (DR) programs. Storage and new transmission would not cost effective.

The energy that would most benefit from more storage capacity (and new transmission) is nuclear, because it only has two speeds, full and off. Nuclear plants would therefore become significantly more cost effective if it could store power during off-peak hours when prices are low and do its planned servicing shutdowns during peak periods. Since the so-called “nuclear renaissance” has been most stymied by the skyrocketing costs of new plants, the availability of economically viable storage would dramatically lower nuclear’s calculated levelized cost of electricity (LCOE) and thereby likely attract potential investors. 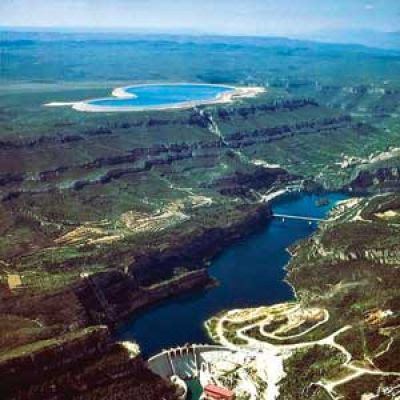 This post is based on Wind-Hydro Integration: Pumped Storage to Support Wind by Fernando Perán Montero and Juan J. Pérez (June 1, 2010, HydroWorld)