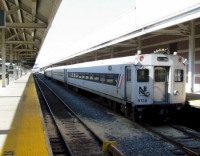 Philadelphia, United States A company developing a “recycled” energy project from breaking trains in Philadelphia has been awarded a major grant by the state of Pennsylvania.

As part of the project, Viridity Energy will deploy its software optimization system to allow SEPTA to recycle the energy created from the regenerative braking ability of trains and trolleys at a high-use propulsion substation in Philadelphia, which will in turn improve power quality, produce energy savings and generate revenues.

The project will pair the latest 21st century technologies and energy optimization practices with one of the country’s oldest transportation systems, dating back to the deployment of electric trolleys in 1892. Mass transit systems across the country are striving to maintain high quality service while facing growing fiscal challenges which are further compounded by rising energy costs. If successful, the pilot may help transit systems to help meet these challenges while at the same time improve grid reliability in highly populated urban neighborhoods.

The project calls for Viridity Energy and SEPTA to install a large-scale battery to capture the energy from regenerative braking of trains along a portion of the Market-Frankford Line, the highest ridership line in SEPTA’s system.