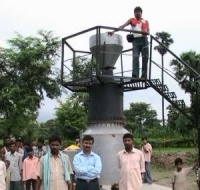 Virginia, United States [RenewableEnergyWorld.com] Two students from the University of Virginia’s Darden School of Business recently started a business that supplies electricity to rural villages in India by gasifying the rice husks that are a waste product of rice milling. So far, two rice husk generators are providing power to about 10,000 rural Indians, but the business plan calls for a rapid expansion that will put the miniature power plants in hundreds more villages within a few years.

Last week, the duo received US $50,000 and a big vote of confidence in their business plan when they won the Social Innovation Competition at the University of Texas. The Darden students, Charles “Chip” Ransler and Manoj Sinha, were judged to have the most compelling new idea to change the world. The University of Texas’ RGK Center for Philanthropy and Community Service awarded the prize to their business, Husk Power Systems, which uses a proprietary technology to gasify rice husks and generate three valuable products: electricity, waste ash that can be sold as an ingredient for cement and a reduction in carbon emissions.

This technology provides off-grid power to rural Indian villages of 200 to 500 households. Using the husk-powered mini power plant, the team plans to offset close to 200 tons of carbon emissions per village, per year in India.

“The final pitch to the judges had all the drama and emotion of a night on ‘American Idol’ – but with a much loftier mission,” said Peter Frumkin, director of the RGK Center for Philanthropy and Community Service.

The US $50,000 award was the latest in a string of accolades that Ransler and Sinha have received for their Husk Power plans. On April 7, they picked up a US $10,000 check for winning Darden’s annual business plan competition. Also in April, they were selected as one of 10 finalist teams among 245 entries from 23 countries in the Global Social Venture Competition hosted by the University of California at Berkeley.

Husk Power was also a top-10 finalist at this year’s Ignite Clean Energy competition at MIT, where Ransler and Sinha took a second place finish worth US $35,000, bringing their total winnings to almost US $100,000.

The idea for the rice husk generators was originally conceived by Sinha, who earned his engineering degree from the University of Massachusetts and holds 10 patents for work done at Intel, and Gyanesh Pandey, the third leader of Husk Power, who left an engineering career in Los Angeles to return to India and oversee the rice husk project on the ground there.

Sinha and Pandey went to college together in India and both hail from rural Indian villages that struggle with a lack of electricity. “We grew up in those areas,” explained Sinha. “Our relatives still do not have electricity. We wanted to give back to those areas.” Originally they envisioned refining the generator concept and raising enough money to donate rice-husk generators for two or three villages near where they grew up, said Sinha.

Then, at Darden, Sinha shared the idea with Ransler, who did a bit of research and soon suggested that the generators could be a financially viable business that could be expanded to hundreds of villages. There are 480 million Indians with no power and 350 million of them live in rural villages, concentrated in eastern India’s “Rice Belt,” where the villagers are “rice rich and power poor,” explained Ransler.

The team was struck, said Ransler, by how “these big things all work together” – three sources of revenue could be produced from what was otherwise a waste product sitting in huge piles slowly rotting in villages across India. Even with conservative electricity consumption, revenue from the three sources would allow each rice husk generator to break even in about two and a half years, and it would reduce carbon dioxide emissions by 200 tons per year, per village. Furthermore, explained Ransler, a lack of reliable electricity is one of the biggest obstacles to small business growth in rural India, so providing a village with rice-husk power can be the enabler of a dozen other small business ventures. They concluded, “someone should do this. Why shouldn’t it just be us?”

With all the refinements, the business plan soon started “looking like Starbucks – you can put one of these in 125,000 locations, hire local people, and turn a raw material into money – just substitute rice husks for coffee beans,” said Ransler.

What about the original motive of providing a social good to rural India? “This is basically, through capitalism, making something happen that wasn’t going to happen without it,” noted Ransler. “We don’t see any contradiction between doing well for ourselves and doing even better for others.”

Brevy Cannon is a general assignment writer in the media relations department at the University of Virginia.