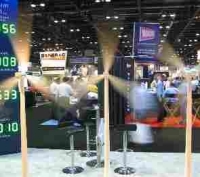 Florida, United States [RenewableEnergyWorld.com] At the Power-Gen International conference — an event with over 1,200 exhibitors in the coal, oil and natural gas industries — you might not expect renewables to play an important role in the conversation around energy. But as businesses in the conventional energy sector are now convinced that a carbon cap and trade system and a federal renewable electricity standard in the U.S. are coming soon, there’s no way around it: Renewables are here to stay.

Businesses that restructure to reflect these upcoming changes to the energy landscape will be the winners; others that don’t embrace that change may lose their competitive advantage.

While this theme is nothing new, it has taken on a new sense of urgency with the election of Barack Obama as the next president. Most people presume the federal government will pursue an aggressive clean energy agenda under Democratic leadership in both Congress and the White House. That’s putting new pressure on an industry that has never had to account for the full costs of producing fuels and electricity from dirty sources.

There was certainly recognition of that reality at the Power-Gen conference in Orlando, Florida last week. For 20 years, traditional power companies have gathered at Power-Gen to discuss trends in the fossil energy industries; a discussion that has evolved in recent years to include how utilities and power companies can meet the challenges posed to their businesses by the clean energy legislation. 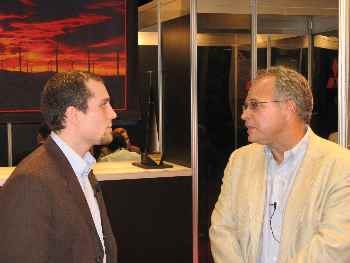 “The world is changing around us. There’s a lot of opportunity in these changes that will come,” said John Adams (pictured right, with Stephen Lacey), senior vice president of new projects at Mitsubishi Power Systems. “If you rely on the old style of doing business, you won’t be there in 20 years…so the vision that you have to have is ‘think forward.’”

With a 50-year business plan, Mitsubishi is certainly thinking forward. The company is a player in both the fossil- and renewable-energy industries, providing gas turbines, boilers, wind turbines and a whole range of other products to those markets. Wind, solar, electric vehicles and carbon capture and storage will be some of the strongest pieces of Mitsubishi’s long-term plan, said Adams.

In the short term, most companies looking to diversify may stick to renewables and stay away from things like “clean coal” and carbon capture and storage, said Alan Champagne (shown below, in an interview with Stephen Lacey), vice president of business development at the engineering and construction firm CH2M 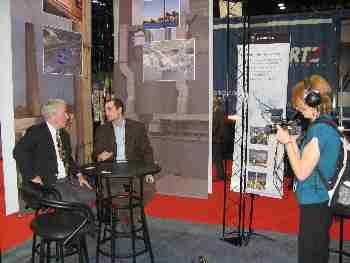 HILL. Because there are so many uncertainties around cost and technological capabilities, renewables are often seen as a safer investment, he said.

“There’s a very strong push for renewable energy. We see a lot of our customers who have always been coal and gas folks who are now scouting out the market to see what’s out there. There’s a lot of activity going on…and a lot of push to be diversified,” said Champagne.

CH2M HILL is responsible for much of the construction at the 2012 London Olympics. The company will also be managing the development of Masdar City, a 3-square mile carbon-free city in Abu Dhabi. In addition to a diverse portfolio of traditional and sustainable construction projects, the company has also developed an interactive solar resource map for the San Francisco area and will be working with the U.S. Department of Energy to provide engineering and financial modeling assistance to cities around the country that are interested in solar. This broad range of projects has positioned the company well for future changes in the construction and energy markets, said Champagne.

“It’s really good to be diversified in this business because of the fluctuations in what customers are looking for,” he said. “Everybody realizes you’ve gotta have a diversified portfolio.”