New Hampshire, USA — Experts believe that the PJM Interconnection system, which encompasses all or parts of Delaware, Illinois, Indiana, Kentucky, Maryland, Michigan, New Jersey, North Carolina, Ohio, Pennsylvania, Tennessee, Virginia, West Virginia and the District of Columbia, can handle up to 30 percent of its energy from wind and solar without “any significant reliability issues,” assuming transmission upgrades and additional regulation reserves — and at the same time reducing costs and reliance on its costlier conventional generation fleet.

Twelve PJM member states have renewable portfolio standards ranging from 18-25 percent, most with solar carve-outs. PJM projects its own wind and solar requirements will continue to steadily build from roughly 4 GW combined wind and solar in 2010 to 33 GW of wind and over 9 GW of solar by 2029. [Update: PJM’s latest Regional Transmission Expansion Plan suggests it’ll need to accommodate roughly 38 GW of renewables to meet all those states’ RPS targets by 2028.] To get their arms around this rapidly increasing amount of wind and solar energy in its infrastructure back in the spring of 2011 PJM stakeholders requested a study, led by GE Energy, to assess the operational, planning, and market impacts of adding large-scale integration of wind and solar power over the next 15 years. The study covered how it would take shape and be operated, what transmission upgrades would be required, capacity values, and general overall impact on PJM operations. Ten scenarios were explored, from simply maintaining 2011 levels of 2 percent renewable integration, to meeting a 14 percent RPS mandate by 2026, up to a maximum of 30 percent energy annually from solar and wind.

Preliminary results were disclosed last fall, and final results were presented last week. The bottom line: PJM says its system “would not have any significant reliability issues operating with up to 30 percent of its energy [from renewables]” (note: that’s energy, not capacity) though it will require significant additional transmission (nearly $14 billion) and regulation reserves (up to 1.5 GW).

Here’s a shortlist of the findings, which are summarized here and discussed in more detail here and here: 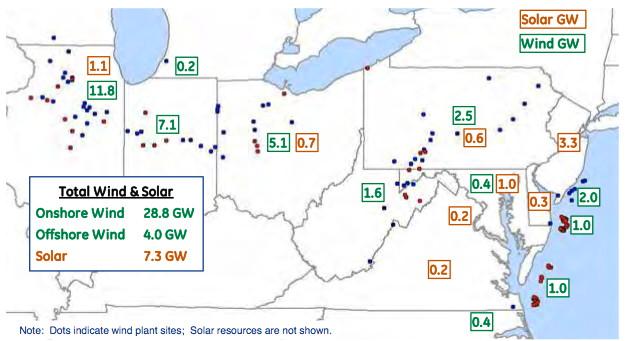 The study takes into account the technology likely incorporated into future wind farms, e.g. larger, taller, and more powerful turbines, that will have higher capacity factors and effective load carrying capabilities than what PJM already uses. It also touches on some impact to (ISOs) and RTOs such as larger balancing areas, shorter scheduling intervals, and centralized wind power forecasting. However, the study pointedly does not analyze the economics of it all or compare the capital investments required. Nor does it get into transmission costs, e.g. generator interconnections and upgrades to mitigate voltage problems, and it didn’t run simulations to evaluate frequency and voltage control issues. To the energy storage angle, the study didn’t assess the economics of the regulation market, suggesting market price of regulation and capital costs will ultimately decide viability.

As a follow-up, the study suggests further examination of reserve requirements and improving resource flexibility, including adding active power controls to wind and solar plants. Recommendations will be explored in more detail at future stakeholder meetings, likely for the PJM’s Intermittent Resources Task Force, which meets roughly every two months (the next meeting is March 17).