Livermore, Calif. — Sandia National Laboratories researchers have devised a novel way to realize electrical conductivity in metal-organic framework (MOF) materials, a development that could have profound implications for the future of electronics, sensors, energy conversion and energy storage.

A paper to appear in Science magazine, “Tunable Electrical Conductivity in Metal-Organic Framework Thin-Film Devices,” debuted in the Dec. 5 edition of Science Express. The paper — co-authored by a group of Sandia researchers and collaborators at the National Institute of Standards and Technology (NIST) — describes a technique that experiments show successfully increases the electrical conductivity of one MOF by over six orders of magnitude.

“Fundamentally, this sheds enormous light on the conduction process in these materials,” said Alec Talin, a material scientist at Sandia and the paper’s lead author.

Materials researchers have considered MOF materials primarily for use in gas storage, drug delivery and other conventional applications for porous materials. Their crystalline structure, which resembles molecular scaffolding, consists of rigid organic molecules linked together by metal ions. This hybrid of inorganic and organic components produces an unusual combination of properties: nanoporosity, ultrahigh surface areas and remarkable thermal stability, which are attractive to chemists seeking novel materials that combine the superior performance of traditional inorganic semiconductors with the low cost and ease of fabrication typical of conducting organic polymers.

Allendorf, a chemist and MOF expert who called the research findings the most exciting development in his 28-year Sandia career, likens them to “tinker toys” for chemists.

“When you imagine the ‘Tinkertoys’ we played with as children, you recall they are essentially wooden balls with holes that you can link together with sticks,” Allendorf explained. “MOFs work the same way, only you substitute metal ions for the balls and organic molecules for the sticks.”

The resulting open space within the scaffolding can be filled with guest molecules, which gave Sandia’s Talin the idea to use the pore to make the MOFs electrically conducting.

“Importantly, MOFs possess a characteristic of molecules that allows us to adapt their properties to a specific application: we can perform chemistry on them, unlike traditional inorganic electronic materials, such as silicon and copper,” said Talin. Molecules, he said, represent the “ultimate, small-scale unit” at which electronic devices can be made. They are so difficult to manipulate and organize, however, that practical “molecular electronics” have not been realized. “How you connect to molecules, where you place them — those issues have consistently perplexed materials scientists,” said Talin.

The Power of Empty Space

So he considered a different approach. “With MOFs, we can get around this problem by using the nanopores to organize molecules. The trick is to pick the right kind of molecule, so that it binds to and interacts with the entire framework.” Some MOFs, says Talin, have empty holes in the Tinkertoy balls that can bind molecules that infiltrate the pores. 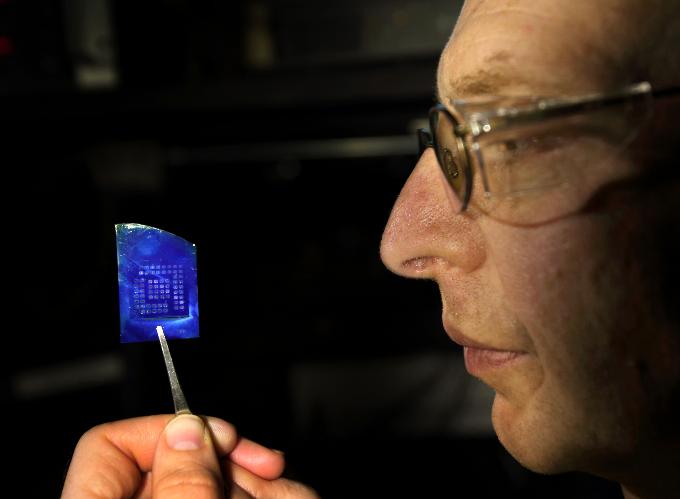 Sandia National Laboratories’ Alec Talin inspects a silicon chip coated with a thin oxide layer, an array of platinum electrodes and a MOF film. Optical absorption and interference in the MOF and silicon-dioxide layers give rise to the deep blue color. Credit: Dino Vournas.

“This isn’t like silicon, which can’t change its electrical properties,” Talin said. “You can add tiny amounts of dopants to silicon or introduce other impurities, but with our approach, you suddenly have the potential to tailor the material to achieve exactly the properties you want. This is the beauty of molecular electronics.”

To test their hypothesis, Sandia and NIST’s researchers added a molecule known as tetracyanoquinodimethane, or TCNQ, to their framework. First, they took a substrate with platinum electrodes patterned on its surface and coated it with a thin film of the MOF. The substrate was then dipped in a solution containing the TCNQ molecule, which they knew would seep into the MOF’s tiny pores. The MOF film containing the TCNQ bridged the electrode connection points, which then could be connected to a current meter for measuring.

“Frankly, I thought it would never work,” said Allendorf. “But that’s the great thing about science: being wrong can be a good thing.”

The Results Are In

The research team found that the MOF materials were conducting, though at relatively small quantities at first. “It was clear that something good was happening, so we were very excited,” said Allendorf.

The experiment was repeated several times with slight but important improvements in film quality achieved by optimizing the laboratory fabrication process.

“Conditions matter, and we had to be very deliberate in how we prepared the framework to accept the guest molecule,” said Allendorf. Removing the water and excess solvent from the film is no trivial matter, he said. The research team fine-tuned the process over the course of several months and, in doing so, began to see large leaps in electrical conductivity.

The researchers plan on patenting their approach and also hope to land additional funding in order to experiment with other guest molecules.

Keeping Up with Moore’s Law and Other Applications

“The overwhelming success of this project opens a whole new way to design electrically active materials,” said Talin. Organic materials, he pointed out, offer low costs and mechanical flexibility. “There are probably hundreds of potential applications for this work that come into play, such as breath analysis and microelectronics,” he said.

Solar technology is another potential application, said Allendorf, and the Department of Energy’s Office of Energy Efficiency and Renewable Energy funded some of the initial research. “With electrically conducting MOFs, we might very well be able to combine the high efficiencies achievable with traditional inorganic thin film materials such as polycrystalline silicon with the low cost and flexibility aspects of organic photovoltaics,” he said

“Our next step needs to be the exploration of other hosts and guest molecules,” said Talin. “We’d like to experiment with different MOF structures and different organic molecules to see if new behavior emerges. We want to see where this new learning takes us.”