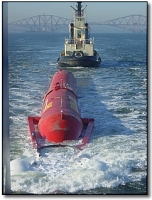 Technology used to gather wave energy is taking some hints from the wind energy industry, and Ocean Power Delivery (OPD) is ready to move onto the next stage of investments and testing for its Pelamis Wave Energy Converter.

Edinburgh, Scotland – June 28, 2004 [SolarAccess.com] So far the company has raised £7.5 million in investments, including over £1.5 million from The Carbon Trust, which is involved in the general activity of promoting investment in low carbon technologies. They are co-investing in Pelamis alongside Norsk Hydro Technology Ventures, 3i and Sustainable Asset Management. “Wave power offers a fantastic opportunity for the UK to emulate the wind industry, which today has grown into a multi-billion pound export-led business, employing tens of thousands of people in Denmark, Germany and Spain,” OPD Chairman David Lindley said. Building on technology developed for the offshore industry, the Pelamis has a similar output to a modern wind turbine. The first full-scale pre-production prototype has successfully completed initial trials in the North Sea and will be tested at the European Marine Energy Centre in Orkney later this year. Successful verification of the prototype’s performance throughout 2004 will allow production of the first commercial machines to begin. OPD is currently working with major partners in Scotland, South West England and Portugal to deploy initial pilot schemes over the next two years. A commercial wave-farm would consist of tens of interlinked machines providing electricity through a common sub-sea cable to shore. A 30 MW wave-farm would occupy a square kilometer of ocean and provide sufficient electricity for over 20,000 homes. Russell Pullan, Head of Venture Capital at The Carbon Trust, said “Although a number of companies around the globe are exploring innovative ways to harness the ocean as a free energy resource, Pelamis is clearly one of the leaders in the race to make electricity generation from wave power a commercial reality”.