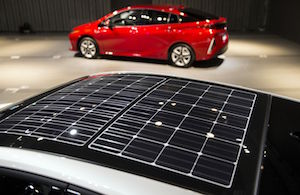 Panasonic Corp. sees the future of solar on car rooftops.

The Osaka-based electronics maker has started producing a 180-watt array of solar cells that can be fixed to the roof of an automobile. In February, Panasonic announced that its photovoltaic module would be used on the roof of Toyota Motor Corp.’s latest Prius plug-in hybrid.

Cars represent a potentially lucrative new outlet for solar cells in an industry where intense competition from Chinese manufacturers has pushed down prices sharply. That’s prompting some manufacturers to adapt solar cells for everything from home roofing tiles and the outer skins of buildings to backpacks and tents.

“Car roofs have the potential to become a new market for solar panels,” Shingo Okamoto, the general manager at Panasonic who was in charge of developing the technology, said. “We made history in the auto industry and in the solar industry with the sun powering mass-produced cars for the first time in the world.”

Cars could hold the promise of a giant new market for solar panels from Panasonic, which also is partnered with Tesla Inc. in making batteries at its Gigafactory outside Las Vegas. There are 264 million cars and light trucks in operation in the U.S., according to the National Automobile Dealers Association.

Others are noticing the potential. Tesla Chairman Elon Musk tweeted in November that his company’s Model 3 car may come with a solar roof. He’s also beginning to sell a type of roof tile for homes featuring embedded photovoltaics. Nissan Motor Co. offers an add-on solar panel option for its Leaf electric cars, giving extra charge to systems such as the air conditioners and radios, according to Nicholas Maxfield, a spokesman for the company.

As of the end of April, Toyota had sold 1,350 units in Japan of the new Prius plug-in equipped with solar panels, nearly 9 percent of the total, according to the car maker.

The latest Prius is the first mass-produced model to be outfitted with solar panels that provide juice for the car’s main battery, according to Toyota. Because of seasonal variations in sunlight, the amount of charge will fluctuate, meaning the average distance traveled on a single charge will range from an average of 2.9 kilometers (1.8 miles) to 6.1 kilometers depending on the time of year.

“That means you get about 10 percent of annual mileage from solar just by letting your car sit,” Okamoto said in an interview in Tokyo.

While that’s modest, developers say the amount of charge will improve over time and that the range could be extended by adjusting a car body’s design and the amount of surface upon which the panels can be affixed.

“We are aware that the panels are supplying only a small amount of electricity,” said Shoichi Kaneko, chief engineer for Prius. “But this system is still a breakthrough as we are making use of the energy we would be wasting otherwise. By filling all available space with cells, it is possible to extend the range easily to 10 kilometers.”

In its current iteration, the solar rooftop represents a step forward for Toyota as it aims to reduce carbon dioxide emissions from new cars by 90 percent by 2050 from 2010 levels.

This is Toyota’s second attempt to outfit a Prius with a solar roof. A Prius released back in 2009 had the option of a solar panel capable of producing 56 watts of power, but it was only used to charge the ventilation systems.

To come up with the panels needed for the new Prius, Panasonic engineers first began compiling a set of conditions and constraints they figured solar panels would face when affixed to the roof of a car instead of a house.

The list included constant vibration, the unpredictable appearance of shadows, and the limited amount of space for installation. Engineers also considered how to make panels fit the contours of a car’s roof instead of the flat surfaces found on residential rooftops.

To handle the variable sunlight expected from shade, Panasonic also adjusted the way bypass diodes are configured in the solar panels to ensure a smooth flow of electric current, according to Panasonic’s Okamoto.

“You’ll see panels become more common as an option, particularly on high-end electric sedans and SUVs,” said Colin McKerracher, an analyst at Bloomberg New Energy Finance. “But the range benefits are always going to be limited. This is mostly about feeling smug.”