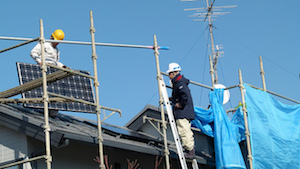 Japan’s scaling back of a program encouraging residential solar has Panasonic Corp. hopeful the market for home energy storage systems is about to receive a boost.

In 2019, a program designed to buy back solar power flowing from rooftop panels at above-market rates will start becoming less enticing, potentially leaving homeowners who signed up with excess power on their hands. Osaka-based Panasonic is anticipating that installations of energy storage systems combined with solar panels are set to rise as a result.

Panasonic has been selling residential energy storage systems that include a battery and an inverter since 2012. In April, it will begin offering a new model that’s a third the size of the current version while also being able to be hung on an outer wall and installed using fewer parts.

“We are counting on more people preferring to consume electricity produced from their home solar panels on site, rather than selling it to power companies” once their incentives expire, said Ryo Matsumoto, who’s in charge of business planning and development at Panasonic’s Eco Solutions unit. “We are seeing 2019 as a turning point.”

The new model with an inverter and a 5.6-kWh storage battery will sell for 1.69 million yen ($15,000), according to Panasonic, an electronics company that makes solar panels and lithium-ion batteries.

Tesla Inc., the electric-car maker and renewable energy company led by Elon Musk, is offering a 14-kWh Powerwall storage system for 873,000 yen, according to the company’s website. Tesla began mass production of batteries for energy storage with Panasonic at its Gigafactory in Nevada earlier this year.

In November 2009, the Japanese government began a program to buy excess power from rooftop solar at above-market rates in order to promote photovoltaic power. Utilities bought solar power from residential rooftops at 48 yen/kWh for 10 years.

Following the 2011 Fukushima nuclear disaster, the government introduced a wider incentive program for clean energy. Currently, rates for residential solar are as low as 31 yen, while solar rates for larger projects are at 24 yen.

The incentives expanded Japan’s residential solar, with cumulative capacity increased from 2.7 GW in 2009 to about 11 GW in 2016, according to data from Bloomberg New Energy Finance.

The expiration of incentives beginning in 2019 is expected to provide business opportunities, said Takashi Hokiyama, a spokesman for the Japan Photovoltaic Energy Association.

“Japanese solar companies are not just making panels but also other products” that can be used with solar, he said.

Still, the number of units being sold is small. About 10 percent of customers who install Panasonic’s solar panels add storage systems, according to the company.

Consumers are increasingly interested in energy storage as a means to increase disaster preparedness in a country frequently hit by earthquakes and typhoons, Matsumoto said.