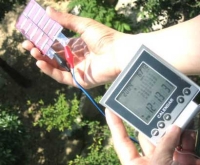 Santa Barbara, California [RenewableEnergyAccess.com] While the technology is still two to three years from being commercially viable, a professor of physics at the University of California, Santa Barbara and a team of Korean scientists have created a new “tandem” organic solar cell with a six and a half percent efficiency.

Developed at the Center for Polymers and Organic Solids at the university, the technology advancement was a joint effort between Nobel laureate, and professor, Alan Heeger and Kwanghee Lee of Korea. The discovery, explained in the July 13 issue of the journal Science, marks a step forward in materials science.

“The result is six and a half percent efficiency,” said Heeger, who co-founded Konarka Technologies in 2000 to develop and market solar cells based on this technology. “This is the highest level achieved for solar cells made from organic materials. I am confident that we can make additional improvements that will yield efficiencies sufficiently high for commercial products.”

Tandem cells are comprised of two multilayered parts that work together to gather a wider range of the spectrum of solar radiation—at both shorter and longer wavelengths. Heeger and Lee, who have collaborated in the past on the advancement of solar cell efficiency, expect this technology to be on the market in about three years.

The new tandem architecture both improves light harvesting and promises to be less expensive to produce. In their paper, the authors explain that the cells “… can be fabricated to extend over large areas by means of low-cost printing and coating technologies that can simultaneously pattern the active materials on lightweight flexible substrates.”

The multilayered device is the equivalent of two cells in series, said Heeger. The deposition of each layer of the multilayer structure by processing the materials from solution is what promises to make the solar cells less expensive to produce.

“Tandem solar cells, in which two solar cells with different absorption characteristics are linked to use a wider range of the solar spectrum, were fabricated with each layer processed from solution with the use of bulk heterojunction materials comprising semiconducting polymers and fullerene derivatives,” wrote the authors.

The cells are separated and connected by the material TiOx, a transparent titanium oxide. This is the key to the multilayer system that allows for the higher-level efficiencies. TiOx transports electrons and is a collecting layer for the first cell. In addition, it acts as a stable foundation that allows the fabrication of the second cell, thus completing the tandem cell architecture.

Lee, a professor in the Department of Materials Science and Engineering at the Gwangju Institute of Science and Technology, in Gwangju, Korea, made fundamentally important contributions to the tandem organic solar cell project, along with first author Jin Young Kim, a postdoctoral fellow who is also from Korea. Other collaborators from UCSB’s Center for Polymers and Organic Solids include Nelson E. Coates, Daniel Moses, Thuc-Quyen Nguyen, and Mark Dante.