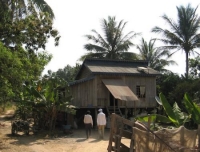 Siem Reap, Cambodia – Cambodia’s decades of war has made the country’s poor electricity infrastructure even worse, leaving millions of Cambodians in constant struggle for lighting. But that is now changing. With declining prices of solar technology and the introduction of low-income oriented payment options, villagers are increasingly harnessing the sun to power their wooden huts. 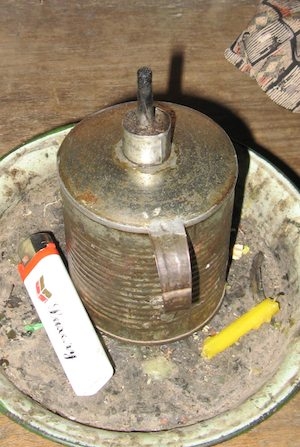 In rural Cambodia, where about 11 million people live beyond the reach of electric grids, most villagers rely on one of two sources for lighting: kerosene lamps, which serve nearly half of this off-grid market (left), or automobile batteries, which villagers use if they have a bit more money and seek energy for lighting, cell phone charging and watching television.

But there are downsides to these two solutions. Villagers explain that the open flame kerosene lamps often burn their children. And although using automobile batteries is safer, it requires frequent trips to diesel-powered charging stations to recharge the battery.

“When my parents were too busy to recharge the empty batteries, the whole family ended up sitting in the dark,” said Muon Tuorn, a 25-year-old guesthouse receptionist who shared her experience.

Such troubles are opening the door for solar solutions that provide safe light and require no travel time. More importantly, rural families have discovered that solar lanterns and solar home systems can even help them save money.

Currently, for the average family here, fuel expenditures on a kerosene lamp are about $30 annually, while a solar lantern that lasts for two years costs only $25.

For richer Cambodians who use more energy, buying a solar home system has proven to be an economic choice compared to automobile batteries.

According to the Asian Development Bank, the cost for a solar home system in Cambodia ranges from $200 for a 20-watt system to $600 for an 80-watt one. Although expenses on automobile battery use vary from family to family, depending on the battery size and recharging frequency, interviews with villagers demonstrate that their investment in solar home systems usually takes three years to pay back.

And solar home systems are becoming more cost competitive as diesel fuel costs escalate. During the last six months, the recharging fee of automobile batteries (right) has already gone up by 25 percent due to rising fuel costs in the country. 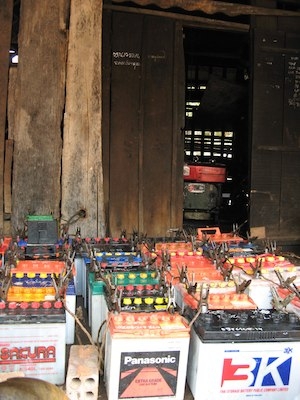 Still, many villagers find it hard to make the switch to solar energy because they can’t afford the upfront investment. But solar entrepreneurs in the country have been working hard to help. One popular practice is to partner with local micro loan providers who can loan villagers the money to purchase solar lanterns or solar home systems. Villagers can then gradually repay the loans through savings on kerosene or automobile battery recharging fees.

Although the lending scheme helps villagers deal with the upfront investment, it is far from perfect. Like other developing countries, lenders in Cambodia often charge a high interest rate on the loan. If a family takes a three-year loan for a $300 solar home system, the interest rate will push the total investment to about $423, according to Michel Kindbeiter, managing director of Cambodia’s Credit Mutuel Kampuchea, a micro loan provider with a comparatively low interest rate in the market.

For those who don’t want the loan, there is another way to embrace solar energy. Last year, a local solar company, Kamworks, rolled out a rental service that allows villagers to rent a solar lantern at a daily rate of 8 cents, roughly the daily rate for kerosene.

The service was so well received by the rural poor that the company plans to expand its rental outlets from its current 3 to 80 this year.

Challenges Ahead and Unexpected Help

More business, of course, also means more challenges. “If we have to pre-finance solar lanterns [for the rental service], we also have to raise capital. That is still quite difficult for us,” said Jeroen Verschelling, a director at Kamworks.

Besides that, distribution remains a barrier. It is hard to reach and provide after-sales services to villagers scattered in remote areas. Furthermore, it also takes a lot of effort to promote solar energy, given the fact that less than 20 percent of the rural population in Cambodia has even heard of the technology, according to figures from the Asian Development Bank.

Despite these difficulties, there is still some good news. In 2009, the Cambodian government cut the import tariff on items like solar panels from 35 percent to 7 percent. And surprisingly, it is sometimes villagers themselves who handle the marketing and distribution setbacks.

Duc Vy is one such case. After hearing of his friend’s positive experience with solar energy, Duc travelled three hours by bus to the nearest solar company and bought a solar home system. A half-hour training session at the company plus an illustrated guidebook turned the then 53-year-old truck driver into a solar installer, at least for his own house.

The solar system has been working well since he mounted it on the roof three years ago, said Duc as he greeted neighbors who came by to watch television powered by the sun.

Yotam Ariel specializes in solar energy in the developing world, runs an online database (www.bennu-solar.com/resources), and provides market intelligence for businesses and organizations that are active in this sector. Contact Yotam at: y.ariel@bennu-solar.com