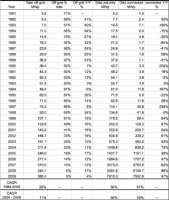 The PV industry must rely on its unstable grid-connected sector for volume and likely profits, but off-grid applications are already at parity, don’t require the same incentives, and are still ripe for new products, explains Nagivant Consulting’s Paula Mints.

May 19, 2010 – The times for the PV industry, they are a changin’ — not in terms of the technology, but certainly in terms of volume and application focus. The last five years brought significant change in the industry landscape, moving it from megawatts to gigawatts and from unprofitability to higher then lower then higher margins. The market for PV systems is certainly volatile these days, but the volatility is on the grid-connected side of the market (as is the stupendous growth exhibited since 2004).

In the rush for ever-larger installations, the off-grid market has been largely ignored. Currently, rapid change is the order of the day, leaving the industry and its stakeholders struggling to adapt. For example, in the early 2000s a large system was in the 500kWp to 1MWp range — with the 1MWp system the outlier. Multi-megawatt grid-connected systems began to pop up in the mid-2000s, entirely due to the German feed-in tariff. As the FiT incentive model moved through Europe system sizes increased from 1MWp to >20MWp — and all along few industry participants thought the trend to multi-megawatt systems would last. Multi-megawatt installations require stable, long-lived, and generous incentives, and the lowest cost of hardware. With its stable and long-term incentive structure, these large systems have flourished in Europe, but one significant change (such as the threatened retroactive degression to Spain’s FiT) would likely cast a pall on investor enthusiasm worldwide because it would add risk to all incentives. Instability — thy name is grid-connected solar.

Just where does off-grid solar sit during these heady times of multi-megawatt installations? First, off-grid solar, particularly to remote areas that are unlikely to have grid access, is already at parity. Second, it does not require the same sort of incentives as does the grid-connected application. Table 1 presents the size of the of-grid market compared with the entire industry and that of the grid-connected market for PV from 1981 through 2009. Note that from 1986-1993 the off grid share of the total PV market was >90%. In 1999 the off-grid share of the total PV market was 61%. Unfortunately, the off-grid share began declining steadily in 1996, from 86% that year traveling all the way down to a 5% share of the total market in 2009.

Clearly then, despite the relative stability of the off grid application, the PV industry must rely on its unstable grid-connected application for volume and likely profit.

The basic off-grid applications have not changed, though new products that fit within these applications and sub-applications are and will continue to be introduced. For example, e-paper (a portable electronic storage device — think e-books and electronic signs on store shelves) fits neatly into the consumer power recreational sub-application right along with solar driven toys and garden lights. Over time, the use of solar on greenhouses has come in and out of vogue, and is a reasonable application for technologies low in efficiency, less expensive, and flexible. Table 2 offers an overview of off-grid applications.

The market for off-grid products is unlikely to experience boom times similar to that of the grid-connected application. Affordability remains a barrier for the developing world, and unfortunately, polluting energy sources can be cheaper initially (though potentially more costly as time goes on). There is often a disinclination among populations in rural developing areas of the world to accept solar electric systems as a substitute for utility grid electricity. Solar electricity is seen as different, perceived not as good as the utility-electricity available in urban areas. The perception is that if the solar electric systems are accepted, the opportunity for connection to the utility grid (and have electricity of the same quality as the urban areas) will not be forthcoming. One irony is that in many areas of the developing world electricity in urban areas is less reliable than solar home systems, or village power systems in the rural areas.

Major funding agencies have come to accept PV power supplies as fully reliable for many social projects in the developing countries. A number of additional agencies have also come into existence, combining an understanding of regional problem solving with novel new approaches to private and public funding. A number of these new groups include offshoots of philanthropic organizations and local banking establishments.

Continued development of financial infrastructures, including methods for prepayment and system management, offers the potential for commercially funded projects less susceptible to year-to-year cycles. These factors, combined with the fact that nearly two billion people are still without power in developing countries (along with lacking potable water), argue for increasing growth, though caveats to growth potential remain. These caveats include (along with financing) the need to properly set user expectations, to train users in simple maintenance procedures, to properly administer implementation of the project, to design a system (fee for service, rental, etc.) whereby the project has a chance of self-sufficiency — and finally, the availability of affordable module product.

For industrialized parts of the world, there is demand for vacation homes, campers, telecommunication needs, and others. Though the market for the smaller modules used in these applications is, again, unlikely to boom, it certainly could grow faster with the right product introduction at the right time. Many industries, after all, would enjoy an 8%-11% compound annual growth rate. Table 3 provides application growth rates over time.

Now that the market for grid-connected solar products has driven PV industry demand into the gigawatt range, the subject of off-grid solar products rarely arises at conferences — and this is unfortunate. Again, for the developing world, photovoltaic technology offers the best, cleanest, and perhaps only true chance for electrification. For the industrialized world there is sufficient need for reliable electricity that does not require grid connection. For cities looking to integrate solar in their mix, this can provide a long-term answer for the need to provide street and freeway lights. And finally, some solar toys are awfully darned cute.