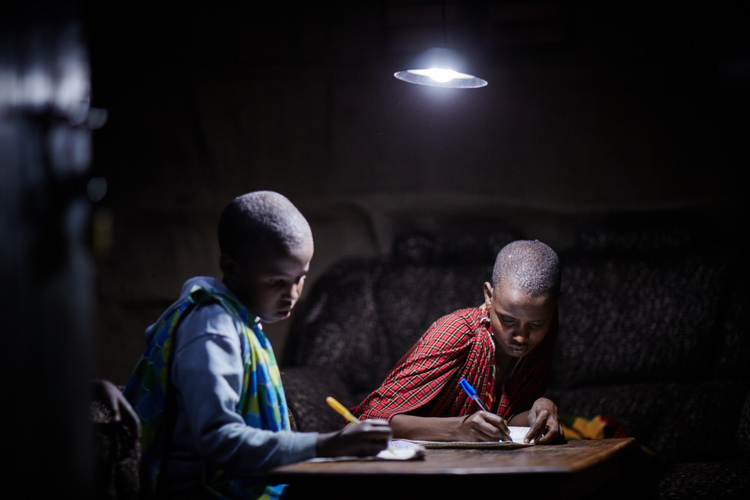 A solar company has won the prestigious Zayed Future Energy Prize for its work in bringing electricity to power-starved areas of Tanzania.

Off Grid Electric (OGE) scooped the prize in the small- to medium-sized enterprise category at the awards ceremony in Abu Dhabi on Jan. 18.

Founded in 2011 by three college friends, the company provides a solar kit to Tanzanian homes that previously relied on kerosene lamps for lighting.

With OGE, they pre-pay for electricity via mobile phone at the beginning of each month and in return receive a solar panel, LED lights, and a Li-ion battery, which connects to the panel via a DC cable to allow night-time use.

Speaking to Renewable Energy World after receiving the award, Chief Executive and Co-founder Xavier Helgesen said that tackling the reliance on kerosene was vital for Tanzania, where 85 percent of its 50 million population do not have access to electricity.

“Tanzania basically spends the whole proceeds of its tourism industry on buying kerosene, he said, adding that the negative health effects of people spending every evening in a room with a kerosene lamp “is like smoking two packs of cigarettes a day.”

Helgesen said that “the number one thing that keeps solar from taking off in Africa is that people are expected to pay for a lifetime’s energy up front.”

He added that the “overwhelming adoption of solar in Africa in the future is going to be in small chunks” in the pay-as-you-go scheme utilised by OGE and other companies using a similar business model.

The Zayed Future Energy Prize comes with a $1.5 million winner’s check, and Helgesen said he plans to use the money to “grow the salesforce into the thousands” from the existing 1,000, many of whom come from local universities.

“That gives them local ownership,” said OGE’s Vice President of Business Development Graham Smith. “That’s vital because the things that we are trying to solve are important to them.”

Winning the prize comes just a month after the company secured $25 million of funding from private investors who were attracted by the concept of micro-solar leasing.