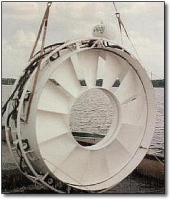 Ocean energy company Florida Hydro said they have developed a strategy for harnessing the power of one of the world’s most well-known, and powerful ocean currents, the nearby Gulf Stream. U.S. Navy engineers will soon help test and enhance an ocean-bound turbine designed by Florida Hydro Power and Light (FHPL) for extracting electricity from ocean currents. The Naval Surface Warfare Centerýs Carderock Division (NSWCCD) and FHPL will deploy the turbine in the Gulf Stream, then connect it to the Florida power grid.

Palatka, Florida – March 17, 2004 [SolarAccess.com] “For over thirty years, scientists and engineers have sought ways to capture the power of the Gulf Stream current to generate electricity,” the company said. “However, all previous attempts have proven cost-prohibitive due to problems with technological scalability and the large capital costs associated with deploying an offshore underwater power plant. Under a February 13 Cooperative Research and Development Agreement, the Navy and FHPL will test and refine the FHPL innovative open center turbine unit and mooring assembly. FHPL will construct the production units at the company’s facility in Palatka, Florida. Carderock Division brings to bear technical experts and unique facilities for efficient testing and refinement of the new design. NSWCCD will use expertise in propeller design and moored systems as well as its unique hydrodynamic test facilities. Work will be performed at division sites in Bethesda, Maryland and Fort Lauderdale, Florida. Florida Hydro is quite confident about their system too. The company said their multi-patented Open-Center Turbine system solves the problem of scalability and reduces construction costs by up to 60 percent. In addition, they contend the system is approximately 22 percent more efficient than any other turbine technology on the market. There is a need to develop new, green electricity supplies to meet national energy needs, diversify energy supplies, reduce security and reliability risks, and reduce environmental impacts, the company said. This growing, clean, renewable energy market is partly the impetus for Florida Hydro’s development. Two scaled-down prototype models of the Open-Center Turbine have already been constructed and tested. A presentation and demonstration of the second prototype “Baby” (seen in the pictures at the link below) took place in the Gulf Stream current off the east coast of Florida in June of 2001. The company is now hoping to move things forward in both the testing phase and the commercialization phase. “Emissions from fossil fuel power plants are a primary source of pollution in the United States,” the company said. “As the nation becomes more aware of this, it will look more seriously toward renewable sources such as ocean currents. The Gulf Stream has tremendous energy capacity, and Baby has proven that it can convert that power into electricity,” the company said.

Whether the device can convert that power into cost effective electricity, and on a commercial scale is another question altogether that will demand further testing. This project will be carried out in three phases, culminating in the construction of a fully-operational 3-megawatt pilot power plant located off the coast of Palm Beach County. If all the testing goes as planned Florida Hydro has big plans for their ocean energy device. “Energy production by this site will prove the viability of the Open-Center Turbine technology and provide the basis for the construction of a 532-turbine-unit offshore hydroelectric plant fueled by the power of the Gulf Stream current,” said the company.