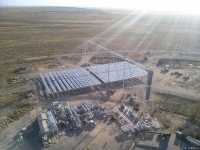 Mountain View, CA — President Barack Obama took the Blue-Light stage here at Wal-Mart in Mountain View, California, to announce several plans for improving energy efficiency and announce commitments by several big retailers to support solar PV. He led with his plan to invest another “$2 billion in energy upgrades for federal buildings over the next three years.” He also touted his three-year-old Better Buildings Initiative, noting that “190 businesses and organizations have signed on, committed to improving energy efficiency in America’s commercial buildings by 20 percent by the year 2020.” And he vowed “to support training programs at community colleges across the country that will help 50,000 workers earn the skills that solar companies are looking for right now.” He reckoned that, “Every four minutes, another American home or business goes solar, and every panel is pounded into place by a worker whose job cannot be overseas.” Well, perhaps not pounded, exactly.

Obama was in California for a series of meetings this week, including a Democratic National Convention dinner in nearby San Jose last night. The choice of a Wal-Mart for the 14-minute energy speech was no accident. “I know this looks like a typical Wal-Mart, but it is different — and that’s why I’m here,” he said. “Wal-Mart has already got the most installed on-site solar capacity of any company in America. And now you’ve announced plans to double that capacity. And it’s all part of your goal to buy or produce 7 billion kilowatt hours of renewable energy by 2020 — something that could save Wal-Mart $1 billion a year in energy costs,” Obama said.

“California presents a great opportunity for Wal-Mart to make significant progress toward our sustainability goals by installing solar power on more than 130 store rooftops throughout the state,” said Kim Saylors-Laster, Wal-Mart vice president of energy. “Wal-Mart has reduced energy expenses by more than a million dollars through our solar program, allowing us to pass these savings on to our customers in the form of everyday low prices,” he noted.

In 2010 Wal-Mart commissioned Solar City to install more solar systems in California. “Wal-Mart has undertaken one of the most ambitious solar initiatives of any company in the United States, and tripled the scale of its initial project with us,” said Lyndon Rive, SolarCity’s CEO, at the time of the announcement. In many of its California and Arizona stores, Wal-Mart is testing out thin-film panels using copper indium gallium selenide (CIGS) and cadmium telluride panels. Among financial partners in some of the Wal-Mart solar installations are the Environmental Defense Fund, Pacific Gas & Electric Corp., the National Bank of Arizona and various government incentives.

Obama also might have picked Mountain View, a part of the Silicon Valley, because it is also a hot bed for solar research and development. For example, Mountain View is the U.S. engineering center for France’s Areva Group, a concentrating solar thermal technology developer that now has a 5-MW demonstration plant running for Tucson Electric Power (TEP). The plant is producing power as cheaply as nine cents per kilowatt-hour, according to Jayesh Goyal, the vice president of Global Sales for Areva, based in Santa Ana. Areva’s Compact Linear Fresnel Reflector (CLFR), or Fresnel technology uses sunlight and mirrors to produce steam, which can be used either for electricity generation, or as an input source for steam generators, or both when needed. TEP is planning to use some of the Areva steam at its H. Wilson Sundt Generating Station in Tucson to feed an electrical generator that is normally coal-fired. Such hybrid use adds value to the solar installation. 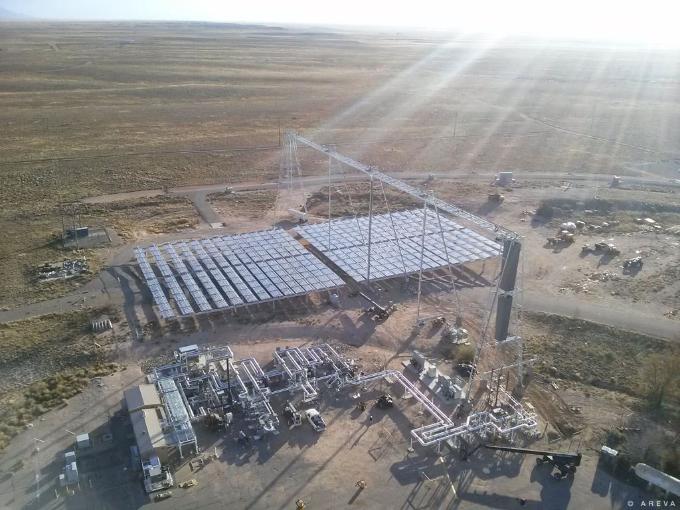 Now Areva is testing a molten salt energy storage plant at the Sandia National Laboratory’s National Solar Thermal Test Facility in Albuquerque, New Mexico (see image left, source: Areva). While the Fresnel system can heat salt to temperatures high enough to convert energy for 18 hours, most utilities are only looking for six to eight hour’s worth of storage, noted Goyal. The relative cost of storing energy from PV generated electricity is a factor of 5 times higher than the cost of storing Fresnel steam energy as molten salt, so it is much more efficient,” he said. “Following this test we expect to see the technology used in Saudi Arabia, in South Africa, and in other locations soon,” he said.