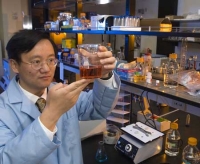 According to the U.S. Department of Energy (DOE), advances are needed in four areas to make hydrogen fuel an economical reality for transportation: production, storage, distribution and fuel cells. Most industrial hydrogen currently comes from natural gas, which has become expensive. Storing and moving the gas, whatever its source, is costly and cumbersome, and even dangerous with little infrastructure for refueling a vehicle.

Using synthetic biology approaches, Zhang and colleagues Barbara R. Evans and Jonathan R. Mielenz of ORNL, and Robert C. Hopkins and Michael W.W. Adams of the University of Georgia, are using a combination of 13 enzymes never found together in nature to completely convert polysaccharides and water into hydrogen when—and where—that form of energy is needed.

Polysaccharides like starch and cellulose are used by plants for energy storage and building blocks, and are very stable until exposed to enzymes. Just add enzymes to a mixture of starch and water and “the enzymes use the energy in the starch to break up water into only carbon dioxide and hydrogen,” Zhang said.

A membrane bleeds off the carbon dioxide and the hydrogen is used by the fuel cell to create electricity. Water, a product of that fuel cell process, will be recycled for the starch-water reactor. Laboratory tests confirm that it all takes place at low temperature—about 86 degrees F°—and atmospheric pressure.

The vision is for the ingredients to be mixed in the fuel tank of a car, for instance. A car with an approximately 12-gallon tank could hold 27 kilograms (kg) of starch, which is the equivalent of 4 kg of hydrogen. The range would be more than 300 miles, Zhang estimates. One kg of starch will produce the same energy output as 1.12 kg (0.38 gallons) of gasoline.

Using polysaccharides as the hydrogen storage carrier, however, the research team achieved hydrogen storage capacity as high as 14.8 mass percent, which they reported in the May 23 issue of PLoS ONE, the online, open-access journal from the Public Library of Science.

Mielenz, who heads the Bioconversion Group in ORNL’s Biosciences Division, attributed the successful research to a unique collaborative working relationship between scientists, lab divisions and universities.

“Pairing our biomass conversion capabilities with facilities for studying renewable hydrogen production in the lab’s Chemical Sciences Division was a key to this project,” Mielenz said. “This also shows the value of partnerships with universities such as Virginia Tech and the University of Georgia.”

Over the years, many substances have been proposed as “hydrogen carriers,” such as methanol, ethanol, hydrocarbons, or ammonia-all of which require special storage and distribution. Also, the thermochemical reforming systems require high temperatures and are complicated and bulky. Starch, on the other hand, can be distributed by grocery stores, Zhang points out.

“The next R&D step will be to increase reaction rates and reduce enzyme costs,” Zhang said. “We envision that in the future we will drive vehicles powered by carbohydrate, or energy stored in solid carbohydrate form, with hydrogen production from carbohydrate and water, and electricity production via hydrogen-fuel cells.

“What is more important, the energy conversion efficiency from the sugar-hydrogen-fuel cell system is extremely high—greater than three times higher than a sugar-ethanol-internal combustion engine,” Zhang added. “It means that if about 30 percent of transportation fuel can be replaced by ethanol from biomass as the DOE proposed, the same amount of biomass will be sufficient to provide 100 percent of vehicle transportation fuel through this technology.”

In addition, the use of carbohydrates from biomass as transportation fuels will produce zero net carbon dioxide emissions and bring benefits to national energy security and the economy, Zhang said.