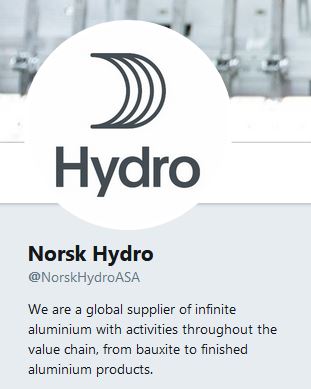 Norsk Hydro has suffered from a cyberattack that has crippled some of its infrastructure. Norsk Hydro is primarily an aluminum manufacturer, but the company also owns and operates 17 hydroelectric power stations in Norway.

As of the time of writing this story, the company’s website was a simple placeholder that said: “Following an extensive cyber attack on Tuesday March 19, Hydro has made progress in securing safe and stable operations across the company.”

The company was directing people to its Facebook page for updates, but that page appears to be unavailable.

Its Twitter account however is available, and it contains a link to a recording of a webcast from today’s update on the cyberattack. A spokesperson in that video said, “We are trying to be as transparent as possible in this complex situation.”

Norsk Hydro immediately began isolating plants and operations after detecting the attack, said Chief Financial Officer Eivind Kallevik. He said, “An enormous collective effort has been carried out throughout the organization with the aim to ensure safe and stable operations.” He said the Norwegian police have opened an investigation into the cyberattack and it is too early to determine the operational and financial impact of the incident.