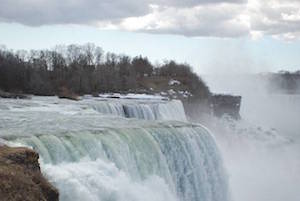 Hydropower is one of the oldest renewable technologies, representing approximately 6 percent of the total energy generation and about half of all available renewable energy capacity in the U.S. The idea behind the process is based on either flowing or falling water. The generated flow controls turbines that in turn produce electricity.

Conventional hydropower plants are therefore located either close to large waterfalls or near high-current rivers, capable of delivering large water volumes in a short time period. Other than having positive environmental effect, hydropower is the most efficient energy source currently available. Modern power plants can convert up to 90 percent of obtainable energy into electricity making them twice as efficient as Fossil fuels. Besides direct impact, hydro plants have a number of useful side effects like storing water to control flow and making electricity generation more predictable, or releasing water for land irrigation during dry seasons.

Currently New York State has more than 300 hydro generation stations producing 80 percent of all renewable energy. Given the state’s large mountain footprint, as well as over 500 rivers with water flow reaching 20,000 cubic feet per second, it is no surprise that New York is the largest hydropower producer in the northeast. The state power authority NYPA owns three largest plants, accounting for 28.7 GW in annual electricity production.

Niagara Power and St. Lawrence Power are the oldest stations capable of delivering approximately 21 GW of electricity using traditional hydropower technologies. Located in upstate New York, the dams underwent multi-billion upgrades in the last 10 years making them more environmentally friendly and increasing their capacity by over 10 percent. Unlike Niagara and St. Lawrence projects, Blenheim-Gilboa is a pumped storage facility that circulates water between two reservoirs located at different elevations.

As the water descends, it passes through turbines that generate electricity. Then the water is pumped back up and the process continues. Evidently pumping water into upper reservoir consumes energy. However, since it is done during off-peak hours, it becomes a viable stored resource waiting to be discharged at the appropriate time. The stored water is then released during market peak hours, helping to smooth out electricity supply. The station produces up to 7 GW annually, making it an important element of the grid. Overall, the state derives over 18 percent of its electrical needs through locally generated hydropower.

New York is a third largest hydro energy generating state in the U.S. After Washington, a clear leader in hydro technologies generating over 70 GW annually, New York comes quite close to Oregon that produces just over 30 GW. While the hydropower growth rates in the state remained relatively constant in the past 25 years, the last few years have seen an uptick given the emergence of new technologies as well as government’s increased focus on renewable energy.

Clearly, New York has a long history of successful hydropower implementation and usage. Even with growth of other alternatives, hydro tech remains a central element of the renewable energy mix in the state. An energy comparison of various renewable sources reveals that hydro is by far the cheapest alternative available. With production cost of 0.85¢ per kW, it is 10 to 20 times cheaper than mainstream renewables like wind or solar. However, significant upfront construction costs and limited territorial availability make conventional hydro dams a challenge. Unlike wind and solar that can be installed in virtually any location, traditional hydro plants require substantial vacant land and access to water ways.

This is where modern technologies come in. Hydrokinetic or in-stream systems do not require elevation or significant water flow to generate power. In such systems, the turbines are installed underneath the surface of moving water, making small rivers and even wastewater treatment plants viable alternatives to conventional hydropower. They do not require large land footprint or significant water flow to generate electricity on the small scale. Furthermore, hydrokinetic technology could harness the energy of the ocean. With over 120 miles of Atlantic Ocean coastline, any in-steam or tidal technologies will have a potential to create sizable new supply of clean renewable energy for the state.

As a final thought, retrofitting existing irrigation and water dams to generate electricity along with their originally intended use could provide that missing link, allowing New York State to reach its goal of generating 50 percent of energy from renewable sources. Given its size, location and available water resources, it is only logical to assume that hydropower will play an important role in the state’s renewable future.