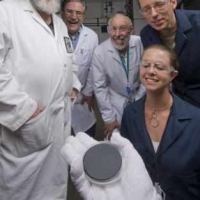 A number of recent technological advances suggest new pathways to solar cells that will convert a large fraction of sunlight into electricity — if the technologies can be commercialized, that is. The technologies relate to everything from the surface of solar cells to their very heart, so let’s start at the top and work our way down.

In November, researchers at Rensselaer Polytechnic Institute (RPI) announced that they have developed an antireflective coating that captures the entire spectrum of sunlight from any angle. The researchers stacked seven layers of antireflective coating, each about 100 billionths of a meter thick, or 100 nanometers. Each layer is composed of nanoscale rods, all positioned at an oblique angle. The arrangement allows each layer to enhance the antireflective qualities of the layer below it, resulting in a highly efficient capture of sunlight. The work was funded by the DOE Office of Basic Energy Sciences.

Researchers from the Massachusetts Institute of Technology (MIT) took a similar approach to boosting solar cell efficiency, but focused their efforts on the back of ultrathin silicon solar cells. The team applied an antireflection coating to the front of the cell and covered the back with multiple layers of reflective coatings and a diffraction grating, trapping light within the cell and boosting its efficiency by up to 50%.

Going back to the front of the cell, Sunovia Energy Technologies, Inc. and EPIR Technologies Inc. have developed a glass ceramic material with nanoscale crystalline particles embedded in it that is transparent to visible light but converts ultraviolet light into visible light as it passes through. The material could be used as a cover on rigid solar modules, increasing their conversion efficiencies. RenewableEnergyWorld.com reported on this breakthrough earlier this month.

Turning to the heart of the solar cell, researchers at Ohio State University (OSU) have devised a potential solar cell material that can capture the entire visible portion of sunlight. The material, an electrically conductive plastic combined with metals, such as molybdenum and titanium, is still a long way from a functional solar cell, but it has promising properties, including the ability to generate electrons that remained in an excited energy state for a relatively long period of time.

Even better solar cell materials probably remain undiscovered as yet, but you — yes, you — could help discover them. Under a new effort led by IBM and Harvard University, people can allow their idle computers to help study the potential for organic molecules to convert sunlight into electricity.

The “Clean Energy Project” is part of the World Community Grid, which draws on unused computer resources to generate solutions that can benefit humanity. It will combine quantum chemistry calculations with molecular dynamics to determine the electronic properties of thousands of compounds, and it is expected to be completed in only two years.

Kevin Eber is a senior science writer at the National Renewable Energy Laboratory. In that capacity, he has promoted energy efficiency and renewable energy technologies for nearly 20 years.

This article was first published in the U.S. Department of Energy’s EERE Network News and was reprinted with permission.