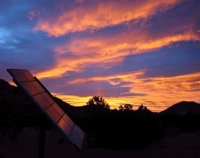 Santa Fe, New Mexico [RenewableEnergyAccess.com] You might think New Mexico, with its second-in-the-nation solar energy potential, would lead the states in turning the sun’s inexhaustible rays into energy. But with less than 100 kW of grid-connected power and the greater majority of its solar installations located in off-grid installations, solar in the Southwest state is by no means a trend — it is hardly a booming industry. All that may be about to change this year and beyond as a combination of newly established incentives and programs are now offering everything from a $9000 tax credit, to performance-based rebate tariffs upwards of 20 cents per kWh.

First off, Governor Bill Richardson recently signed Senate Bill 269, which creates a 30 percent tax credit, allowing an individual tax credit of 30 percent of the purchase and installation costs for solar electric and solar thermal systems, up to $9,000 for each system. The bill provides $3 million for solar electric tax credits and $2 million for solar thermal tax credits each year. And the credit is available for 10 years. So where else have we heard about a 30 percent tax credit? At the federal level, of course, where a much shorter two-year window began this year for a 30 percent tax credit for individuals. This much-hailed piece of legislation, included in last year’s energy bill, is the first federal solar tax credit in more than a decade. New Mexico’s new credit is “intelligently designed” to supplement the federal credit, says Allan Sindelar, President of Positive Energy, a solar installer based in Santa Fe. He says it accomplished what the federal credit could not, which is to offer a good credit but for a long term, offering the type of certainty that helps businesses to confidently make investments in expansion. While Sindelar and others are pleased to see how these two credits help kick up the use of solar in the state, there’s also considerable excitement over a third component that’s expected to rev up the industry in the state. For more than two years now New Mexico has had a Renewable Portfolio Standard (RPS) requiring investor-owned utilities to use renewable energy: 5% in 2006, rising to 10% in 2011. One of these utilities, in fact the biggest one in the state, Public Service of New Mexico (PNM) decided to address the clean energy mandate partly by supporting residential solar photovoltaic (PV) systems. Only recently approved by state regulators, the utility’s plan pays a participating customer with a PV system a credit of 13 cents per kWh, regardless of whether the juice goes into the home, or is sent back out to the grid if the home doesn’t need the power. In this plan, fixed until 2018, the utility considers each kilowatt from solar as a Renewable Energy Credit (REC), which they can then aggregate for their RPS requirement. PNM will still source commercial-scale loads of clean power predominantly from wind power but will have an added incentive to include solar PV because lawmakers wrote the RPS rule to value solar at three times the credit. Regardless of how the utility uses the credit, the 13 cent per kWh credit given to the consumer is provided on top of a net-metering arrangement, where extra power from the customer’s PV system is sent back out to the grid at retail prices, currently around 7-8 cents per kWh in most of PNM’s territory. This is accomplished through a two-metered system; one measures the electricity produced and the other measures whether it’s used in the home or sent back out. Taken together, this means a total rebate of more than 21 cents on average, and based entirely on a system’s performance, a method increasingly seen in other states as the way forward for solar policy. Experts say this is an unique approach among state policies supporting solar energy and a rather progressive one at that. “That’s pretty innovative stuff,” said Sindelar. “It blows me away that happened here in New Mexico.” Ben Luce, President of the Coalition for Clean and Affordable Energy (CFCAE), who was instrumental in pushing for solar incentives in the states, says the utility rebate of around 21 cents per kWh could pay off as much as 45 percent of a typical solar PV system. And coupled with the existing 30 percent Federal tax credit and the new state-based 30 percent tax credit, Luce says this is a break-even profile that effectively pays for the entirety of the solar system. The reality is that utilities like PNM don’t offer solar incentives out of the kindness and progressiveness of their collective cooperate hearts. Once utilities are mandated, as PNM was, they follow through with varying degrees of commitment and enthusiasm. Experts, however, say PNM is quite pleased with the plan — particularly its long-term nature. “PNM is pretty gung-ho,” said John Curl, Utility Division Director of the New Mexico Public Regulation Commission. “They seem to like this approach, and we’re not getting any pushbacks on it.” Curl attributes this new mix of policies to promote renewable energy and solar to widespread and bipartisan political support. “I have never seen this level of interest,” Curl said. “The legislature and the Governor are all very keen on renewable energy in general, and solar in particular.” Executives at Unirac, which focuses solely on designing and manufacturing mounting structures for PV modules and arrays, say the combination of the tax credits and PNM’s rebate will boost the industry in New Mexico but have only a marginal impact on the entire U.S. solar market. Unirac is based in Albuquerque but sells most of its equipment out of state and out of country into stronger solar markets. “We’re going to see a lot of activity now in the state, but this is a small state with only two million people,” said John Liebendorfer, Vice President of the Albuquerque-based company. He says because of this small population, the impact will inevitably be limited in scope. It’s the big populous states that could have the most impact, such as Texas. Liebendorfer said, “When Texas does it, we’ll jump.” In spite of that small population, Jeanne Bassett, Executive Director of the New Mexico Public Interest Research Group, believes the state should and could lead the nation with the largest per capita generation levels of solar. And there still can be some bragging rights to that, she says. “There’s no reason New Mexico wouldn’t lead the country,” Bassett said. “What we have as an edge are the national labs and the solar resources. We’ll catch up quickly with this new credit, we may be behind the eight ball but we’ll get ahead very fast.”