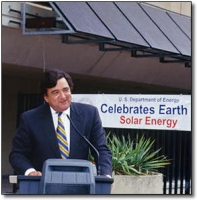 In a move sure give a major boost to renewable energy in New Mexico, the State’s Governor Bill Richardson signed legislation making it mandatory for utilities to source a certain percent of their energy from renewable energy sources, such as solar, wind, geothermal, biomass and hydropower. Not only will New Mexico join a growing list of other states stepping forward and calling for clean energy, but it will be among the more aggressive in its pursuit.

Santa Fe, New Mexico – March 10, 2004 [SolarAccess.com] The bill, a Renewable Portfolio Standard (RPS), requires the state’s major utilities — Public Service Company of New Mexico (PNM), Xcel and El Paso Electric — to derive 10 percent of the electricity they sell from renewable sources by 2011. These utilities must reach a 5 percent renewable threshold by 2006. Rural electric cooperatives are exempted from the state law. “I am proud to say that New Mexico is continuing on its way to becoming a leader in clean, renewable energy production,” Richardson said. “This bill requires energy producers to make a serious commitment to renewable energy production- wind, solar, biomass- and include it in their production base. Imagine, industry, government, and environmental groups- unlikely allies who used to fight about everything- working together for economic development and to protect the environment.” The ruling also included provisions requiring the utilities to offer “green power” programs to their customers, in which customers who want to purchase green power can do so (and the utility must provide it) at a PRC approved premium, according to the Coalition for Clean Affordable Energy. The PRC’s ruling followed several years of public hearings and comment, and intense advocacy by the CCAE and its member organizations, and other groups including ranchers from the Eastern Plains interested in wind power. The RPS component (but not the green power component) was at that time strongly opposed by all four of New Mexico’s investor owned utilities and various other parties. The CCAE estimates this RPS will result in between 500 to 600 MW of renewable energy generation to be built in New Mexico, enough to power roughly 200,000 homes on average. The organization believes this will probably consist mostly of wind power (bringing hundreds of millions of dollars in economic development to the Eastern Plain’s area), with some solar, geothermal, and biomass based generation. While the RPS is a certain boom for renewable energy in the state, the CCAE hopes the new law will filter down to the household level in addition to large projects. “Besides promoting utility scale renewable energy generation, the RPS can in principle also directly benefit residential scale solar and biomass power if these sources are aggregated and credited for their contributions, something that CCAE hopes to promote once the RPS is fully secure.” Richardson also signed HB 251-Advanced Energy Technology Development Act House Bill 251, sponsored by Representative Nick Salazar, that sets up a program for the government to invest around the state in hydrogen and other nascent energy technologies. “Through this energy fund, we are going to convert schools, state buildings, and non-profits to clean energy sources, just as I promised during the campaign,” Richardson said. Richardson also signed Senate Bill 86, sponsored by Senator Carlos Cisneros providing tax abatements for people who purchase fuel-efficient cars. That measure exempts most gasoline-electric hybrid vehicles from the state’s gross receipts tax, which could save consumers who buy the cars hundreds of dollars.